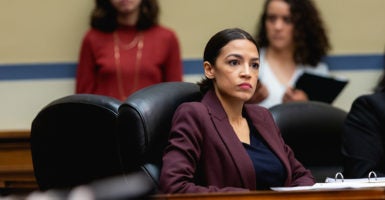 Wayfair employees planned a walkout after learning the online furnishing company is going to fulfill an order to furnish a migrant camp and Rep. Alexandria Ocasio-Cortez, D-N.Y., is voicing her support.

The retailer is going ahead with a $200,000 bed and furniture sale to a detention facility in Carrizo Springs, Texas.

Almost 550 Wayfair employees signed a letter to executives on June 21 in opposition to the sale, The Washington Post reported. The company announced Monday it would be fulfilling the order.

Ocasio-Cortez tweeted her support Tuesday for the walkout, saying, “This is what solidarity looks like.” The New York Democrat has called migrant camps “concentration camps.”

“At Wayfair, we believe that ‘everyone should live in a home that they love,’” the employees wrote in the letter to executives. “Let’s stay true to that message by taking a stand against the reprehensible practice of separating families, which denies them any home at all.”

“Everyone should live in a home that they love” is the Wayfair slogan.

Employees planned the walkout for 1:30 p.m. Wednesday near the headquarters in Boston. The employees will meet at Copley Square to protest, Bloomberg reported. BCFS, a government contractor that manages the Texas facility, placed the order to supply furniture to the migrant camp.

This isn’t the first time Wayfair has sold furniture to a migrant camp. It fulfilled an order in September 2018 for another BCFS facility in Texas that housed over 2,500 teenagers, employees said, according to The Washington Post. The Trump administration closed that Tornillo facility in January because of health and safety concerns.

“We’re walking out in protest of our leadership’s decision to sell to reprehensible concentration camps,” an anonymous employee said, according to the Post. “We had hoped that raising awareness would be enough for them to do the right thing, but it wasn’t. We want to make it clear that this is not a political issue—it’s a humanitarian issue, and we will not back down.”

“As a retailer, it is standard practice to fulfill orders for all customers,” company leadership said in a letter, NBC News reported.