Congress Can Help Migrant Children With This Key Fix 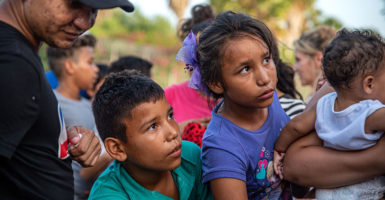 By now it is irrefutable that there is a crisis at the border. Unfortunately, those who are suffering the most are the most vulnerable, namely children.

The stories of children being separated from their parents were heartbreaking—as are the accounts of the brutal journey migrant children must undertake to reach the border, of fake family units jeopardizing their welfare, and of overcrowded and underfunded detention centers.

All of these horrific occurrences are the result of the broken American asylum system that Congress refuses to fix.

More specifically, their common thread is the Flores settlement.

Unfortunately, the Clinton administration succumbed to pressure from activist groups and approved more lenient administrative practices. Among other things, the government agreed to release unaccompanied alien children “without unnecessary delay” to a parent, guardian, or adult relative.

Following that, the most significant change to the Flores settlement came in 2015 when a federal judge misinterpreted the agreement and broadened its scope. The decision expanded the Flores settlement to encompass not only unaccompanied alien children, but also minors apprehended with their parents.

The judge also—despite no such requirement in federal law—construed the “without unnecessary delay” provision to mean 20 days.

However, 20 days is an arbitrary timeline that is insufficient to review asylum claims, particularly as the asylum system becomes more and more overwhelmed by many fraudulent claims.

As family units sought asylum, immigration agencies had two options: They could either separate children from their parents or release the whole family unit into the country.

The public blowback to family separation eventually resulted in its termination, leading to the practice of “catch and release” for foreign nationals with children. Many of those aliens who are released simply disappear and never show up for their immigration hearings.

Consequently, the notion that entering the country with a child will result in an immediate release has led to a huge increase in family units (both real and fake) migrating to the United States, though the vast majority of these migrants—even those who come from impoverished countries—will not qualify for asylum.

Those seeking to take advantage of American asylum laws are clogging up the system. They are not only slowing the process of those with legitimate claims, but are also putting the children they come with in harm’s way.

These children endure a long and dangerous journey of up to thousands of miles to the southwest border. Along the way, they face tough terrains and unhospitable weather with limited resources to keep them going.

Many of these children die during transit or are subject to exploitation and abuse, including a large number who become victims of sexual assault by the dangerous Mexican criminal cartels that smuggle them into the U.S..

Additionally, given the value of having a minor during the asylum process, instances of fake family units have become more common.

There are reports of people seeking to purchase children in Mexico and of “child recycling rings,” in which smuggling networks provide a migrant with an unrelated child, and once they have successfully entered the country, that same child is sent back across the border to repeat this process.

Such practices enrich smugglers and traffickers while putting the lives of these minors in danger.

Furthermore, this surge of family units is overcrowding detention facilities. Without the resources, manpower, or space to properly house and take care of the unprecedented number of migrants in custody, children are vulnerable to diseases, abuse, and psychological harm.

If Congress wants to help migrant children, it needs to fix the Flores settlement. The arbitrary 20-day limit on detaining alien minors must be extended to allow them to stay with their parents in detention as their asylum claims are reviewed and go through the process.

Furthermore, asylum claims that are made by illegal border-crossers and not at ports of entry should be summarily denied. Asylum-seekers should be returned to Mexico to wait while their claims are investigated.

Eliminating the impression that bringing a child to the border guarantees expedited release into the country will reduce the incentive to put a child’s life in danger and provide relief to the congested immigration system.