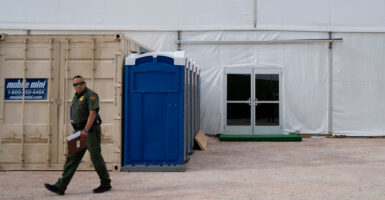 Dozens of migrant children were seen packed into cages and lying on makeshift mattresses at a Texas border facility over the weekend, according to photos obtained by Axios.

The photos reportedly showed children inside the plastic cages, or “pods,” at a Customs and Border Protection temporary overflow facility in Donna, Texas, according to Axios.

Although the pods have a 260-person maximum occupancy, Rep. Henry Cuellar, D-Texas, who gave the photos to Axios, said one held more than 400 male minors.

NEW: Exclusive photos from inside a CBP temporary overflow facility taken over the weekend in Donna, Texas reveal the crowded, makeshift conditions at the border as the government’s longer term child shelters and family detention centers fill uphttps://t.co/uxdWO7cV7N

The facility in Donna, Texas, is one of several that have reached and exceeded capacity set under coronavirus protocols, Axios reported. More than 10,000 migrants, many of which are minors, were in CBP custody as of Saturday.

“We have to stop kids and families from making the dangerous trek across Mexico to come to the United States,” Cuellar told Axios. “We have to work with Mexico and Central American countries to have them apply for asylum in their countries.”

On Friday, Sen. Chris Murphy, D-Conn., said he “fought back tears” while touring a border facility. Murphy said he witnessed a sobbing child who had been separated from her grandmother and hundreds of children packed into rooms.

Facilities that house migrants and unaccompanied minors have reportedly been overwhelmed over the last month as President Joe Biden’s administration attempts to halt the border surge. White House press secretary Jen Psaki finally referred to the situation at the border as a “crisis” on Thursday.

Former President Donald Trump’s administration was widely condemned after it implemented a “zero tolerance” policy at the border, which led to hundreds of children being separated from their parents in 2018. After facing criticism, Trump backed down and reversed his policy, Reuters reported at the time.