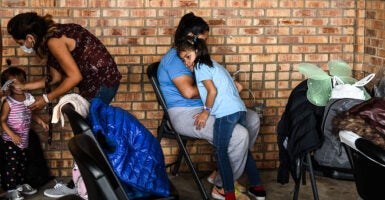 A migrant girl from Central America waits with her mother for a bus after they are dropped off by U.S. Customs and Border Protection at a bus station near the Gateway International Bridge on March 15 in Brownsville, Texas. (Photo: Chandan Khanna/AFP/Getty Images)

Can you spell “hypocrite”? I’m starting to think that it begins with the letter “B” and rhymes with “widen.”

Democrats were scathing critics of the Trump administration’s border policies. They were quick to lambaste former President Donald Trump for “caging children” in squalid conditions and tearing babies from their mothers’ arms.

Democrats held up these bleak examples as proof of Trump’s lack of humanity, painting him as a heartless leader who was unconcerned about housing children in horrible conditions that put their health, and even their lives, at risk.

In fact, prolonged mistreatment of illegal children at the border and the separation of families became a talking point for then-candidate Joe Biden during the presidential debates.

Now, two months into his administration, President Joe Biden is allowing unaccompanied children to cross the border, exempting them from a public health law that allows Border Patrol agents to turn people away because of the pandemic.

The result? The largest surge of migrants at the U.S.-Mexico border in five years, with authorities scrambling to figure out ways to provide them appropriate housing.

Biden is quickly learning that it is very different to oppose a policy and complain about it from the back benches than to sit in the Oval Office and actually deal with it. In fact, Biden is now being blasted for the same situation for which he attacked Trump.

What’s more, Biden has made a bad situation on the border much worse by adopting a lax border-crossing policy that is akin to hanging a sign that says, “Free food, free shelter, and free medical care for those who illegally enter America.”

Unfortunately, the situation that greets these young travelers once they enter the United States is far from welcoming. We are hearing reports and seeing images of children being kept in lockup facilities made for adults. Make no mistake: These are prisons, plain and simple. People are locked behind bars, unable to leave.

In Biden’s America, children who cross the border illegally and alone arrive to find themselves in a locked jail cell with no clear plan for resolution.

We have seen a huge influx of children crossing the border because they know the immigration policy has changed and their chance of obtaining citizenship is greatly improved. Cynical parents from across Central America are willing to risk sending their children by themselves specifically to take advantage of the Biden policy.

Those children ultimately may be able to skip the citizenship line and become Americans if they make it through the labyrinth.

What is especially egregious is that Biden reversed Trump’s “inhumane” border policy without providing an alternative, and he is completely unprepared for the ramp-up that predictably followed.

What did he think would happen, and where did he think these unaccompanied children would go? The mayhem at the border right now is completely his fault.

Why should Trump be vilified and painted with the mark of Cain as a Republican when the situation is no different for our current Democratic president?

At its core, the same thing that Trump experienced is happening with Biden. The fact that it is happening in the midst of the COVID-19 pandemic makes it worse because the migrant children are being housed in close quarters with few alternatives.

Crowding at the Border Patrol facilities is so dire that at least 3,000 youths are being moved to the convention center in Dallas and may end up staying there for months until they can be reunited with relatives or placed with sponsor families. The federal government is footing the bill—which means you and I are.

The bottom line? Actions have consequences. It is not enough to carp and complain. In their rush to dismantle Trump-era policies, the Democrats thoughtlessly threw open the floodgates and created a monster of a problem that is infinitely worse than it was before.

This shows that the deterrence policy the United States had under Trump was actually effective. It worked because migrants knew they would be turned away at the border. But the Biden administration ripped up the Trump policy with glee, and now it is experiencing the fallout.

It’s a shame, and it is going to hurt Biden politically. But we shouldn’t be surprised.

Despite all the positive focus the new administration is placing on coronavirus vaccinations, it is imprisoning children at the border and putting them at even greater risk of getting sick because of overcrowding. It’s not right, and it smacks of hypocrisy.

Have an opinion about this article? To sound off, please email letters[email protected] and we will consider publishing your remarks in our regular “We Hear You” feature.