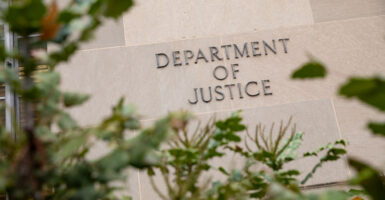 The Immigration Court Efficiency Act would empower immigration courts to hold anyone in contempt who fails to appear at a scheduled hearing and to issue a bench warrant for that person. It would also give them the ability to dismiss facially meritless cases at the outset. (Photo: Samuel Corum/Getty Images)

Two senators, Kelly Loeffler, R-Ga., and Tom Cotton, R-Ark., are taking seriously the need to improve our broken immigration courts, and their attention to this issue is welcome and much needed.

The immigration courts—the courts that conduct removal proceedings and decide asylum claims—are in a sorry state. Their backlog continues to rise dramatically and now sits at more than 1.2 million cases. The average case sits on the docket for 759 days. Aliens from some countries, such as Papua New Guinea and Zaire, have to wait an average of almost six years to have their cases resolved.

What’s more, most of the claims raised by aliens in these cases are not meritorious. They lose more than 70% of cases.

The paralysis of the immigration courts causes real harm to the country and to aliens who have meritorious claims. It is simply unfair that someone with a viable asylum claim should have to wait two or more years to have lawful status recognized because the courts are clogged with frivolous claims.

Comprehensive reform is required, but until it arrives, we have suggested several simple commonsense proposals to increase the immigration courts’ efficiency. Loeffler and Cotton are pushing them forward.

We proposed to give immigration courts the power to hold in contempt litigants and lawyers who disobey court orders. Although every other court in the country has this power, immigration courts do not, and it means that bad lawyers or absconding litigants can drag out cases indefinitely simply by refusing to comply with the courts’ orders and deadlines.

This is a change that can come from the Department of Justice. In fact, Congress authorized the DOJ to give immigration judges contempt authority in 1996, but the Justice Department simply ignored the issue. As such, we argued that if the department continued to ignore it, “Congress should take the question out of the DOJ’s hands.”

Loeffler and Cotton have introduced a bill to do just that. The Immigration Court Efficiency Act would empower immigration courts to hold anyone in contempt who fails to appear at a scheduled hearing and to issue a bench warrant for that person. The bill also gives this contempt authority meaningful teeth: If the court finds an alien in contempt, it immediately can render a judgment against the alien. This is an excellent tool to eliminate some frivolous suits.

In addition to contempt authority, we also proposed to give immigration courts the ability to dismiss facially meritless cases at the outset. Virtually every other court in the country has this power too, but immigration courts must see a case through to the end even if the facts the parties agree to at the beginning compel the court to rule against the alien. This is a huge drag on the immigration courts.

The Department of Justice also has the power to make this change because Congress previously gave it the authority to set immigration court procedures.

To that end, Loeffler and Cotton sent Attorney General William Barr a letter urging him to give the immigration courts the power to “dismiss meritless challenges filed by individual aliens.” They rightly note that “given that the majority of immigration challenges are found to be without merit, there is no better way to eliminate substantial portions of the backlog than to provide immigration judges with this authority.”

These two changes, although small, would go a long way in improving a court system that is stretched to the breaking point.

As we look forward to more comprehensive reform, we applaud these efforts.