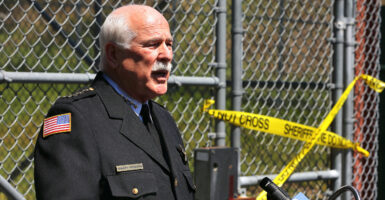 Sheriff Tom Hodgson, pictured at the ICE facility at the Bristol County Sheriff's correctional complex on May 3, 2020, in Dartmouth, Massachusetts, says more fentanyl is pouring into his county because of an open border. (Photo: John Tlumacki/The Boston Globe/Getty Images)

Far from the southern border, Massachusetts is rarely the first place one thinks about regarding illegal immigration. But the pull of generous sanctuary cities and social programs has brought in a significant population, said Sheriff Tom Hodgson of Bristol County, Massachusetts.

So a phone call in May about detaining illegal immigrants came as a surprise to Hodgson, who has worked with federal immigration authorities during multiple administrations.

“I get a call—you’re not going to believe this after the relationships we’ve had after all these years—I get a call at 8:30 a.m. on the way to work saying, ‘Can you get on a three-way call?’ It was the special agent in charge in Boston,” Hodgson told The Daily Signal.

“Sheriff, we’ve got some bad news. We’re shutting down your 287(g) program,” he recalled the ICE official saying in the May conversation.

“We’ve been doing this for 25 years. We’ve never failed an audit. Why would you be doing this?” the sheriff responded.

“Well, we are talking about retooling things and we don’t think we need as many beds,” the ICE official responded, according to the sheriff.

ICE did not respond to The Daily Signal’s request for comment.

The ICE Office of Enforcement and Removal Operations began housing detainees at the Bristol County Detention Center in 2001 under the ICE field office in Boston. ICE has similar detention facilities across the country, often managed by local law enforcement and subject to federal inspections.

The influx of illegal immigrants has only become more intense, so needing fewer beds was clearly not true, the sheriff told The Daily Signal.

“It was a clear political hit. We knew it and there will be more to come about it,” Hodgson said. “They violated our contract, came in, and within hours shut it down. Within two hours they said they were taking the credentials from [staff] and confiscated all the ICE equipment.”

Hodgson said more fentanyl is pouring into the county because of an open border.

“Ultimately it left my people and my county less safe than they otherwise would have been and were until they walked in for political purposes instead of supporting the public safety initiatives of local law enforcement,” Hodgson said.

The Bristol County ICE detention facility is in North Dartmouth, Massachusetts. Bristol County—which includes the cities of New Bedford and Taunton—has fewer than 600,000 residents and is near the Rhode Island border.

“Bristol County, Massachusetts, which most people don’t recognize, has had the highest influx of illegal aliens between 2007 and 2017,” he said. “That in part has everything to do with Massachusetts creating these sanctuary cities, which protect these illegal aliens when they arrive there and it makes it more difficult for law enforcement to identify them.”

Massachusetts benefits are also a big draw, he said.

“People are coming there because the message is, No. 1, Massachusetts gives a lot of benefits. So they want to get housing, medical care, all that stuff. We are one of the more libreral states in the United States that gives it,” he said. “So word gets back to the border real quick. There are places to hide in sanctuary cities and by the way, you’ll be able to get a work card and get money for housing and everything else.”

Hodgson came to Washington on Wednesday to address a “roundtable” event on Capitol Hill sponsored by Republican Sens. Ron Johnson of Wisconsin, Rob Portman of Ohio, and Rick Scott of Florida.

Johnson said the dysfunctional border crisis has to be fixed before taking any action on immigration legislation such as the Deferred Action for Childhood Arrivals, or DACA.

“I want to fix the immigration system. I want to address the DACA kids,” Johnson told The Daily Signal. “But you can’t do that until you take the first step, which is securing our border. The American public will not have the confidence to move forward to reform the immigration system until they realize we have a secure border and we were just that close.”

After ICE shut down the Bristol County facility, the sheriff wrote a letter in June to Homeland Security Secretary Alejandro Mayorkas.

“Between October 2020 and January 2021, the Bristol County Sheriff’s Office was able to detain illegal aliens arrested by local police and brought to our jail facilities with the following criminal histories: armed carjacking, assault and battery on a family household member and strangulation/suffocation, arson, attempted murder, rape of a child statutory, aggravated assault and battery with a dangerous weapon and violation of a protective order,” Hodgson wrote.

“Describing a key public safety program that keeps dangerous criminal illegal aliens off the streets as ‘no longer operationally needed’ shows your complete disregard for the safety and security of the people of Bristol County and the United States of America, and puts the pro-illegal immigrant political agenda of the Biden administration in the spotlight,” Hodgson’s letter continued.

An April inspection by the ICE Office of Detention Oversight mentions reports of detainees complaining about redundant menu options and poor medical care. The ICE facilities must comply with the 2008 Performance-Based National Detention Standards.

Catch and release has become an increasing problem for the county and state, Hodgson said. With the surge at the border, illegal immigrants apprehended by Border Patrol are released and told to report to ICE.