Another College’s Speech Code at Odds With First Amendment Values 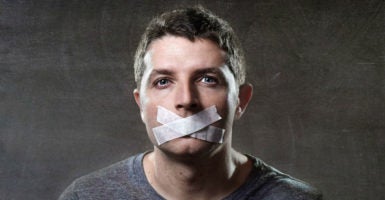 Three students at Kellogg Community College in Battle Creek, Michigan, were arrested and jailed for handing out copies of the U.S. Constitution. (Photo: iStock Photos)

In the words of Supreme Court Justice William Brennan Jr., America serves as a “marketplace of ideas.”

A state-funded college campus, of all places, should epitomize this function. But restrictive policies on campuses across the country are silencing certain viewpoints and limiting speech on campus.

Take Kellogg Community College in Battle Creek, Michigan. This college states that its mission is to “develop students who can think critically, communicate effectively, and demonstrate global awareness.”

If that’s true, why then were Michelle Gregoire and two of her classmates arrested and jailed for handing out copies of the U.S. Constitution?

According to a lawsuit describing the circumstances of the arrest, Gregoire and Brandon Withers were passing out pocket Constitutions in order to gain the required number of student supporters to form an official club on campus.

They were in the process of forming a Young Americans for Liberty chapter of the national, nonpartisan organization that promotes “principles of the natural rights of life, liberty, and property.”

Other university restrictions allegedly frustrated their previous efforts to gain student support to establish a Young Americans for Liberty chapter on campus.

So Gregoire and Withers decided to take to a public walkway on campus because they knew it to be a well-trafficked area that commonly served as a venue for student conversations of all sorts.

Withers claims to have previously observed members of an LGBT student organization distributing literature and another political organization gathering petition signatures in an outdoor area of campus without interference from the administration.

The complaint alleges that the college is engaging in content and viewpoint discrimination by allowing some groups to speak on campus, but not the Young Americans for Liberty.

After distributing pocket Constitutions and talking with interested students, the lawsuit claims, a school administrator approached Gregoire and other classmates to inform the group that they needed a permit to solicit on campus and would be confined to a table in the KCC Student Center to recruit potential club members.

There is a fundamental problem with this system. Restricting conversation to a “speech zone” created by the administration cabins discussions and limits engagement with ideas that students would not otherwise encounter in the classroom.

Not five minutes after their first interruption, another administrator, Drew Hutchinson, approached the students and insisted that they stop their activities. Hutchinson explained that Gregoire was violating the school’s Speech Permit Policy for “engaging [students] in conversation on their way to education places” without a permit.

So much for training effective communicators.

As a result of their violation of the Speech Permit Policy, Hutchinson ordered the students to disband immediately and said he was calling his boss to come speak to them. Instead, campus security arrived on the scene moments later.

Refusing to bow to coercion, Gregoire politely informed them that her group would continue to speak with students outside of the performing arts building.

Campus security officers then arrested Gregoire, and later Withers, for trespassing on campus property. Gregoire and her classmates were hauled off to county jail as a reward for their attempt at raising the civic discourse on campus.

The campus’ chief of public safety, Harold West, informed Gregoire that she could not set foot back on campus without first obtaining his permission. Not only did campus officials silence speech, they wanted to cast a dissenter out of their ideological palace gate.

In light of the arrest and campus censorship, Gregoire and Withers decided to file suit against the community college and its officials.

According to allegations in the complaint, selective enforcement of the campus’ Speech Permit Policy, silencing some views but not others, is both harmful to the academic experience and unconstitutional. The students are being represented by lawyers from Alliance Defending Freedom.

They also claim that by using an arbitrary permit system, the current policy deprives students of access to a public forum in which to spontaneously speak.

This would have been unthinkable for colleges in previous generations. What could be a more appropriate forum for students to freely offer up their ideas for debate than a college campus?

While this lawsuit is in its early stages, it is not the first time that students have had to fight back against selective enforcement of speech codes that are in tension with fundamental First Amendment values.

Recent lawsuits filed against Iowa State University, Georgia Gwinnett College, and the Maricopa County Community College District in Phoenix, Arizona, illustrate a concerning trend regarding speech zones and codes that often silence students, but not always in an equal manner.

Instead of devising policies and procedures aimed at silencing particular ideas, so-called institutions of higher learning ought to once again provide a forum for the marketplace of ideas to flourish.

A failure to do so does great disrespect to our Founders and a disservice to the next generation.