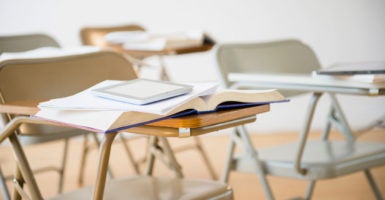 French teacher Peter Vlaming was fired by West Point High School not for saying the wrong thing, but for refusing to say the wrong thing. (Photo: JGI/Jamie Grill/Getty Images)

West Point High School French teacher Peter Vlaming is a soft-spoken man who was well loved by his students. He wasn’t looking for a fight. He was just looking to do his job. But when the school demanded that he use male pronouns for a biological girl student who had decided to identify as a transgender boy, Vlaming was faced with the choice: follow his beliefs and potentially lose his job—or violate his beliefs and keep it.

Vlaming explained to the school that, as a Christian, he believes that God made humans male and female, and that a girl cannot become a boy.

He tried to work with the school. He agreed to call the student by her new masculine name. He asked permission to avoid pronouns altogether when speaking about the student in her absence. (Remember, third-person pronouns “he” or “she” are used when the person is absent, so this could not be said to be a failure of courtesy.)

But to use a false pronoun was to deny God’s purposeful design, and that he could not do. “I did agree to use the new masculine name [and] to avoid female pronouns,” said Vlaming, but “I won’t use male pronouns with a female student.”

The school board fired him by unanimous vote. For insubordination.

He was punished for remaining silent.

Haven’t we been down this road before?

In the 1943 case on whether a school could force someone to salute the American flag, the Supreme Court wrote in strong, clear terms: “If there is any fixed star in our constitutional constellation, it is that no official, high or petty, can prescribe what shall be orthodox in politics, religion or other matters of opinion or force citizens to confess by word or act their faith therein.” (West Virginia State Board of Education v. Barnette).

More recently, the court affirmed the First Amendment right not to recite the Pledge of Allegiance. And just last year, Justice Anthony Kennedy explained that, “it is not forward thinking to force individuals to ‘be an instrument for fostering public adherence to an ideological point of view [they] find unacceptable.'” (Concurring opinion, NIFLA v. Becerra).

So citizens can remain silent during the Pledge of Allegiance, and even to refuse to salute the American flag, but this Christian teacher cannot remain silent when school officials demand that he pronounce a false pronoun?

“He wasn’t fired for something he said,” the lawsuit reads. “He was fired for what he didn’t say.” And this week, he’s decided to do something about it—suing school officials and the school board for violating his right to free speech and religious freedom. Vlaming’s lawsuit seeks $1 million in damages.