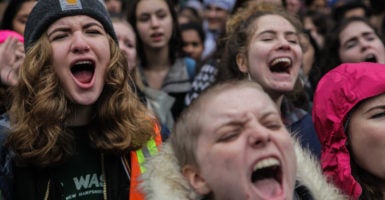 Simmons College published an anti-oppression guide in March to help students and community members combat their tendencies to be racist, sexist, islamophobic, and politically incorrect, and now other colleges and universities are adopting the guide.

Beloit College and Lesley University have adopted the “Anti-Oppression Guide,” which is “intended to provide some general information about anti-oppression, diversity, and inclusion,” the guide’s introduction reads.

The guide examines a number of topics containing elements that fall under the umbrella of oppression, which it identifies as the combination of power and prejudice. The resource points to anti-transgender sentiment, or “Transmisia,” as one hierarchy of oppression and defines it as a “systemized discrimination or antagonism directed against transgender/nonbinary/genderqueer/agender persons.”

“Transmisia and cissexism are rooted in a desire to maintain the gender binary,” the guide also posits, providing a link to “4 ‘Compliments’ Cis People Give Trans Folks That Are Actually Hella Cissexist.”

The resource shuns heterosexism for being built around marriage, raising children, and owning property. “Trans folks can be agents of transmisia as well … by perpetuating the notion of gender binary or ‘passing’ superiority and using it to discriminate against other transgender people,” the guide also notes.

It includes a link to a workbook, “A Practice Guide for White People Working for Racial Justice,” as well as a document intended to help people cope with President Donald Trump’s presidency.

The work, “How To Talk To Your Loved Ones About A Donald Trump Presidency,” offers advice about how to handle the “terrible thing has happened.” Included in the list of topics on coping with Trump’s presidency are immigration, the Supreme Court, Obamacare, climate change, race, LGBTQ rights, gender roles, and Hillary Clinton.

Campus Reform wrote a Wednesday piece about the guide.