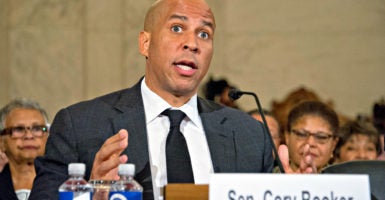 The first day of confirmation hearings for Sen. Jeff Sessions was comparatively collegial compared to the more contentious speakers who testified Wednesday for and against President-elect Donald Trump’s nominee to be the next attorney general.

Sessions didn’t testify during the second day of the Senate Judiciary Committee’s hearings, but former staffers and law enforcement advocates were among those speaking in the Alabama Republican’s favor.

This process should be about facts.

The change in tone didn’t go unnoticed by one witness: William Smith, a former chief counsel to the Senate Judiciary Committee’s oversight subcommittee. Smith, who is black, worked for Sessions.

“Each and every senator who casts a vote to confirm Sen. Sessions will be permanently marked as a co-conspirator in an effort to move this country backward,” @CedricRichmond says.

“The reason we did not see a lot of this yesterday is because members of this committee know Sen. Sessions,” Smith told the Judiciary Committee. “You know he is a strong conservative, but you also know that he is fair and honest.”

“If you disagree with Sen. Sessions because of his political views, let’s have a conversation about that, but let’s have it on facts, not on 30 years of old innuendos that have been disproved.”

Here are four key takeaways from Day Two of the Sessions confirmation hearings:

Early reports that Sen. Cory Booker, D-N.J., would testify against his Senate colleague were panned as unprecedented, which the freshman senator immediately addressed.

“When the choice is between Senate norms and what my conscience tells me is best for my country, I will always choose conscience and country,” Booker said.

Booker noted that the 1957 Civil Rights Act empowered the attorney general to sue in civil rights cases, but he said he doubts Sessions would “aggressively pursue the congressional mandate of civil rights, equal rights, and justice for all of our citizens.”

Borrowing from a famous quotation of Martin Luther King Jr., Booker said the arc of the moral universe doesn’t naturally curve toward justice, but leaders must bend it.

“If one is to be attorney general, they must be willing to continue the hallowed tradition in this country of fighting for justice for all, for equal justice, for civil rights. America needs an attorney general who is resolute and determined to bend the arc,” Booker said. “Sen. Sessions’ record does not speak to that desire, intention, or will.”

In what might have been a reference to Booker’s rumored presidential ambitions, Smith said during his testimony: “This process should be about facts. Not about political aspirations.”

Rep. John Lewis, D-Ga., himself a civil rights icon, invoked his participation in the Selma, Alabama, march for voting rights in 1965, as he talked about Sessions’ references to law and order.

“Those who are committed to equal justice in our society wonder whether what Sen. Sessions calls law and order would mean today what it meant in Alabama when I was coming up back then,” Lewis told the committee. “The rule of law was used to violate the human and civil rights of the poor, dispossessed, people of color. I was born in rural Alabama, not very far from where Sen. Sessions was raised.”

He later added: “We’ve made progress, but we are not there yet. There are forces that want to take us back to another place.”

During his testimony, Sessions called the allegations of racism “damnably false charges.”

Other former federal prosecutors who are black spoke firmly in support of Sessions.

William Huntley, a former assistant U.S. attorney under Sessions in the Southern District of Alabama, testified that he didn’t know what to expect when Sessions wanted to hire him. That’s because Smith recalled what he had read and heard about Sessions during his doomed nomination for a federal judgeship.

“During that first meeting, I got the feeling that all the rumors spread about him in the press weren’t true,” Huntley told the committee.

Larry Thompson, a former deputy attorney general in the George W. Bush administration, was a U.S. attorney from Georgia. Thompson recalled traveling with Sessions to conferences for federal prosecutors during the 1980s. He noted Sessions’ work in prosecuting Ku Klux Klan leaders in Alabama and, in the Senate, supporting the Fair Sentencing Act:

He will administer equal justice for all without regard to person. I have no doubt that he will enforce the law in favor of all Americans’ civil rights—regardless of their positions or perspectives.

Before addressing Sessions’ nomination, Rep. Cedric Richmond, D-La., chairman of the Congressional Black Caucus, complained about being placed with Booker and Lewis on the third of three panels.

“First, I want to express my concern about being made to testify at the very end of the witness panel,” Richmond said. “To have a senator, a House member, and [a] living civil rights legend testify at the end of all of this is the equivalent to being made to go to the back of the bus.”

Richmond said Sessions will “put forth an agenda that will greatly harm African-American citizens and communities,” and warned senators to reject the nomination.

“Each and every senator who casts a vote to confirm Sen. Sessions will be permanently marked as a co-conspirator in an effort to move this country backward toward a darker period in our shared history,” he said.

Peter Kirsanow, a member of the U.S. Commission on Civil Rights, stressed that Sessions advanced policies that would help the black community hit by unemployment, partly because:

“His most important impact has been on protecting the interests of American workers, particularly black workers,” Kirsanow, who is black, told the committee. “Black employment levels and wage rates have been abysmal for at least a decade. The labor force participation rate for black males is an appalling 61.8 percent.”

He said the civil rights commission’s evidence shows the decline in black employment is a result of the government’s not enforcing federal immigration laws. He said this also has disproportionately depressed black wages.

“That’s hundreds of thousands of blacks without jobs,” Kirsanow said. “This also has broader sociological implications related to family formation and incarceration rates. No one has been more committed or engaged than Sen. Sessions in protecting and promoting the interests of black workers in America.”

In what seemed to be a reference to the Obama administration, Chuck Canterbury, national president for the Fraternal Order of Police, said he doesn’t think Sessions would rush to judgment.

“We believe Sen. Sessions as attorney general will not speak out on incidents that arise without a thorough and full investigation,” Canterbury told the committee.

“With Sen. Sessions, we believe the lines of communications will be more direct than they have been.”

Now this may not sound like much, but at a time when law enforcement officers are being hunted and targeted for violence, many of them are asking, ‘Who has my back? Who will protect me while I protect my community?’ Bills like this which acknowledge and respect the sacrifice made by the rank-and-file officer truly resonate with my members and the public safety community.

The Fraternal Order of Police leader also praised Sessions for backing police on civil asset forfeiture, a matter that has raised some controversy among conservatives and libertarians who say law enforcement is seizing cash and other property from citizens without charging or convicting them of crimes.

“On more than one occasion, Sen. Sessions was among the few in standing up for law enforcement, especially when it came to the issue of asset forfeiture,” Canterbury said. “Without his leadership and support, the Equitable Sharing Program might well have been dismantled, leaving thousands of law enforcement agencies without the resources to cooperate with federal task forces and other multijurisdictional efforts to combat trafficking of drugs, humans, and weapons.”

The Justice Department’s Equitable Sharing Program gives local law enforcement the option of prosecuting asset forfeiture cases under federal law, often more permissive than state laws. This particularly would be the case when local police have a relationship with a federal task force.

Canterbury added: “With Sen. Sessions, we believe the lines of communications will be more direct than they have been. We’ve had good success with career employees at DOJ. They are very professional. We also believe with Sen. Sessions’ information and the knowledge he has had from serving on this committee, he’ll be able to serve us well in the area of criminal justice, with reform efforts, and with training and equitable sharing.”

“We believe Sen. Sessions as attorney general will not speak out on incidents that arise without a thorough and full investigation,” Canterbury said.

On Tuesday, Sen. Patrick Leahy, D-Vt., asked Sessions whether he believed that Trump’s hot mic moment from an “Access Hollywood” appearance in 2005—in which he made lewd comments about groping women—would constitute sexual assault if carried out. He also asked whether a president could be prosecuted for such an assault.

On Wednesday, Amita Swadhin, founder of Mirror Memoirs, an LGBT group for survivors of sexual assault, spoke out against Sessions for changing his point of view from his original answer.

Swadhin acknowledged that Sessions later changed his answer, but she stressed his initial response.