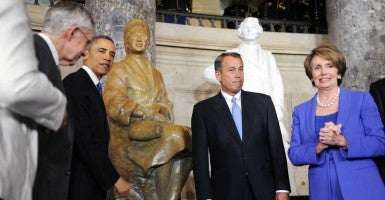 As the House prepares to consider legislation reforming how Medicare doctors are paid, an analysis on the plan by a nonpartisan agency released today shows that it would add more than $100 billion to the federal deficit.

The Congressional Budget Office report analyzes the effects of a $210 billion plan proposed by House Speaker John Boehner and Minority Leader Nancy Pelosi that would replace the Sustainable Growth Rate.

The CBO found that the plan would increase the deficit by $141 billion over the next 10 years–confirming concerns some opponents have about the plan. According to the CBO, just one-third, or $73 billion, of the plan would be offset.

However, there’s disagreement over whether the CBO’s report determined that Boehner and Pelosi’s legislation would save taxpayers money.

The speaker and Majority Whip Steve Scalise, R-La., each expressed satisfaction with the agency’s findings.

>>> The Debate Over How to Pay Medicare Doctors Explained, in 75 Seconds

Meanwhile, groups opposing the deal, such as Heritage Action for America and the Committee for a Responsible Federal Budget, argue the CBO’s report indicates that federal costs would be raised after 2025.

some willfully ignoring this CBO line: Enacting #HR2 would raise federal costs relative to current law during the decade after 2025. #docfix

#SGR/#docfix bill dramatically increases Medicare spending — barely better than a freeze, if at all #pay4docfix pic.twitter.com/K3TwIXIGJ4

Using the CBO’s estimates, the Committee for a Responsible Federal Budget found that Boehner and Pelosi’s plan would add $500 billion to the deficit by 2035.

The Sustainable Growth Rate is the formula used to determine payments to Medicare doctors. It was first conceived in 1997 as a way to stabilize payments to physicians. But, as the costs of health care have outpaced the economy, Congress has passed 17 “doc fixes” over the last 14 years to avoid cuts to doctors’ pay.

Boehner and Pelosi’s legislation, H.R. 2, would replace the Sustainable Growth Rate with a new payment system.

Though Republicans and Democrats agree the Sustainable Growth Rate is largely unworkable, conservatives have pushed back against the bipartisan pair’s plan because of how it is paid for. Still, the deal has bipartisan support, and lawmakers are expected to vote on it Thursday.