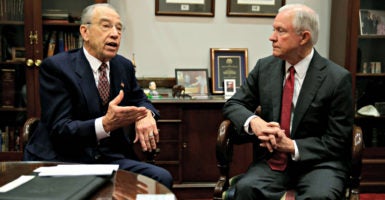 A vocal opponent of confirming Sen. Jeff Sessions, R-Ala., as U.S. attorney general recanted part of his critical testimony 30 years ago against Sessions being confirmed as a federal judge.

“My recollection on this matter has now been refreshed,” @GerryHebert says.

J. Gerald Hebert, a former Justice Department lawyer, made racially charged allegations against Sessions before the Senate Judiciary Committee, which was considering his nomination as a district judge in Alabama.

Immediately after President-elect Donald Trump announced he would nominate Sessions to be attorney general, Hebert—despite having corrected part of his testimony in 1986—issued a public statement opposing Sessions.

A few days later, The Washington Post published an op-ed by Hebert explaining why Sessions shouldn’t be attorney general.

Hebert testified March 13, 1986, in opposition to President Ronald Reagan’s nomination of Sessions to be a U.S. District Court judge for the Southern District of Alabama.

Part of Hebert’s testimony to the Judiciary Committee included allegations that Sessions, while serving as U.S. attorney for the Southern District of Alabama, attempted to block an FBI investigation into a voting rights case in an Alabama county.

Three days later, however, on March 16, Hebert and another lawyer in the Civil Rights Division, Paul A. Hancock, filed affidavits asserting it was a different U.S. attorney, Sessions’ predecessor, who tried to stop the FBI probe.

The matter is significant in exposing unfair attacks on Sessions when Reagan nominated him for a judgeship, now that Trump plans to nominate Sessions for attorney general, said Hans von Spakovsky, senior legal fellow for The Heritage Foundation.

Von Spakovsky said the affidavits “destroy Hebert’s credibility on anything connected with Sessions.”

“These affidavits correcting the record, which got almost no media attention, are another sign that the claims made against Jeff Sessions 30 years ago were baseless and entirely manufactured,” von Spakovsky told The Daily Signal.

Hancock had made his assertion against Sessions before the Judiciary Committee on March 12, one day before Hebert did.

“I answered that my own recollection of that matter was consistent with Mr. Hancock’s,” Hebert said in his affidavit, referring to his testimony three days earlier. “When I rendered that testimony, it was true to the best of my knowledge, recollection, and belief.”

My recollection on this matter has now been refreshed. I have no knowledge that Mr. Sessions ever interfered with any voting investigation in the Southern District of Alabama. … I apologize for any inconvenience caused Mr. Sessions or this committee by my prior testimony.

Because of the allegations, Reagan’s nomination of Sessions for the judgeship failed to clear a Republican-controlled Senate; Sessions eventually withdrew and continued serving as a U.S. attorney, a role he held from 1981 to 1993. He was elected as the state attorney general in 1994 and was elected to the Senate in 1996.

Hebert did not correct other parts of his testimony to the Senate Judiciary Committee.

In that testimony, he recalled telling Sessions about a rumor that a federal judge referred to one lawyer as a “traitor to his race.” To this rumored comment, Hebert claimed Sessions responded: “Well, maybe he [the lawyer] is.”

Hebert also told the committee that Sessions referred to the NAACP and the American Civil Liberties Union as “un-American” and “communist-inspired.”

Sessions denied some of the charges made against him in the 1986 confirmation hearing, but regarding Hebert’s other allegations, he reportedly testified: “I’m often loose with my tongue. I may have said something about the NAACP being un-American or communist, but I meant no harm by it.”

Sessions denied accusations by Thomas Figures, a former assistant U.S. attorney who is black, who said Sessions called him “boy” and told him to watch himself around “white folks.”

Today, Hebert is the director of a voting rights and redistricting program for the Campaign Legal Center, which advocates campaign finance reform and restrictions on money in politics.

Hebert did not respond specifically to The Daily Signal. A spokesman for the Campaign Legal Center referred to a November statement in which Hebert said:

Jeff Sessions has not demonstrated a commitment to fairness and equality under the law, a commitment that should be a minimum qualification for the position of attorney general. To the contrary, he has repeatedly demonstrated racial insensitivity to black citizens of Alabama and this country through both his words and actions. He has never apologized for his racially charged comments during his last tenure at the Department of Justice. I believe that Sessions represents a threat to voting rights for all minorities. It is frightening to think that Sessions will run the U.S. Department of Justice and have the opportunity to roll back voting rights through voter suppression in communities that have long struggled for equality.

Hancock, the other civil rights lawyer at the Justice Department who filed a corrective affidavit after testifying to the Judiciary Committee, said the mistake was corrected almost immediately and likely didn’t affect the judicial confirmation process in 1986.

He added that the matter should not affect Trump’s intended nomination of Sessions for attorney general.

While a lawyer in Justice’s Civil Rights Division, Hancock said, he worked with Sessions because there were many civil rights cases in Alabama and he “never had any difficulty.”

That was not the case with Sessions’ predecessor as U.S. attorney, William Kimbrough Jr., who was in the position from 1977 through 1981.

It was Kimbrough, not Sessions, who tried to stop the FBI investigation of the voting rights case, Hancock explained in his affidavit.

Hancock’s affidavit corrected his testimony on March 12, 1986, a day before Hebert testified. The affidavit was three pages long, with three supporting attachments regarding the Clarke County case from May 1980.

Kimbrough gave his approval for the investigation to resume and apologized for not notifying Justice’s Civil Rights Division before asking the FBI to discontinue it, according to an attached memo.

Heritage’s von Spakovsky compared the incident to the Democrats going after and denying confirmation to Robert Bork, Reagan’s nominee for the Supreme Court in 1987.

“The Borking of Sessions then was shameful and dishonest, and the same misbehavior should not be allowed to occur now,” he said.