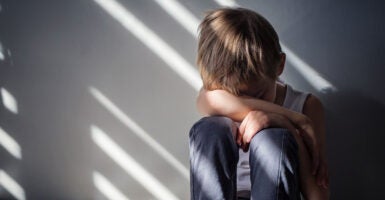 Dysphoria is a symptom associated with a variety of mental conditions, such as stress, anxiety, depression, and substance-use disorders. It is not unique to gender. (Photo: mrs/Moment/Getty Images)

As someone who identified as a woman for eight years, I agree.

In his Feb. 18 statement, Paxton methodically builds the case for his expert legal judgment by detailing the physical, emotional, and mental harms these procedures inflict on children and listing several statutes they violate.

As one who formerly identified as a transgender woman, I can tell you, Paxton is correct.

Adults should not subject children to surgery that removes healthy organs and causes sterilization, nor endanger them with drugs to block normal onset of puberty or to induce cross-sex appearance.

Adults should protect children’s long-term health and well-being, not experiment with it.

The first step in helping anyone, especially children, is to see their troubles through an appropriate lens, free from political ideology.

Unfortunately, gender clinics diagnose all patients with gender dysphoria and immediately prescribe a singular treatment; namely, affirm the opposite gender and change the body to match the mind, a process called “sex change.”

Anyone who questions this radical protocol, even parents, gets hit with accusations of “transphobia.”

My experience after working with many people who regret having a “sex change” is that “gender dysphoria” doesn’t work as a diagnosis. It’s too narrow. It locks people into “sex change” and fails to examine the underlying causes.

Replace it with “dysphoria,” which means “a state of generalized unhappiness, restlessness, dissatisfaction, or frustration.” Dysphoria is a symptom associated with a variety of mental conditions, such as stress, anxiety, depression, and substance-use disorders. It is not unique to gender.

By digging into the causes of a patient’s dysphoria, true healing can be found.

My childhood was plagued with emotional, physical, and sexual abuse—experiences that hurt my mental and emotional well-being and set me on the path to identify as transgender.

When parents write to me for help, the first thing I ask them is: “What happened in your child’s life prior to the onset of gender distress?” Every parent has been able to pinpoint one or more major stressors in the child’s life.

It’s the same for transgender-identifying adults. Everyone who has emailed me for help is able, after a few email exchanges, to identify traumatic childhood experiences they faced or witnessed while growing up.

Psychologists have a name for these incidents, “adverse childhood experiences,” or ACEs.

The Centers for Disease Control and Prevention describes the harmful impact of adverse childhood experiences on physical and mental health this way: “Toxic stress from ACEs can change brain development and affect how the body responds to stress. ACEs are linked to chronic health problems, mental illness, and substance misuse in adulthood.”

Richard had been sexually abused by his older brother, and emotionally and psychologically abused by his alcoholic father. He contacted me five months after his “sex change” surgery at age 26, asking why the medical community did this to him.

Richard says he now understands he didn’t have “gender dysphoria.” His distress was the result of profound and repeated abuse—adverse childhood experiences.

A good therapist or psychiatrist should have seen that and treated him appropriately with psychological protocols, not surgery on his genitals. (You can read more of Richard’s story here.)

Richard is just one example being played out across America and the world. Every day, I receive emails that demonstrate the now-familiar pattern:

Young people suffer from unsafe home environments or other negative events that cause stress, anxiety, depression, and substance abuse. Some cope with the pain by adopting an alternate identity and end up in gender clinics that affirm them, (mis)diagnose “gender dysphoria,” and move swiftly to deliver cross-sex hormone therapy and surgery.

‘Try Harder to Adapt, Give It Time’

Months or years later, still having stress, anxiety, depression, etc., they go back to the gender therapist who blames them: “Try harder to adapt.” “Give it time.” “It was your decision.” “I can’t help you.”

Despondent and alone, they turn to the internet for help, find my website—sexchangeregret.com—and contact me.

By exchanging a few emails to explore what happened in their childhood, they identify the adverse childhood experiences, realize surgery and hormones were unnecessary, and begin the psychotherapy they should have had earlier, only now with a mutilated body.

Gender dysphoria and sex change are a dangerous diversion, full of harm, not help.

No wonder the legal system needs to intervene on behalf of children. Medical professionals turn a blind eye to the obvious connection between gender distress and adverse childhood experience, refuse to explore it, and rush children into surgery and hormonal interventions with lifelong consequences.

As Texas’ Paxton says, it’s child abuse. I applaud him and other brave elected officials for looking out for hurting, vulnerable children, examining the evidence that shows this practice inflicts permanent harm on children, and taking action to stop it.