Doctors Pushed Her to Get Sex Reassignment Surgery. Now, She Knows It Was a Mistake. 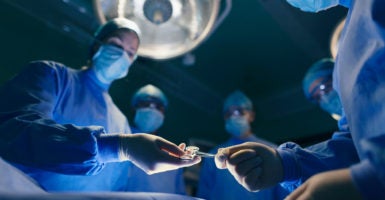 Deborah's doctor did not consider any of her traumatic, sexually abusive life experiences as relevant to her gender distress. (Photo: Shannon Fagan/Getty Images)

Every week, I receive at least one heartbreaking letter of regret from someone who was sexually abused as a young person and later underwent a “sex change” in a misguided attempt to heal the pain.

The sex-change cheerleaders in the medical profession routinely diagnose these people with gender dysphoria and rush to administer cross-gender hormones and recommend surgery.

I myself was sexually abused as a young person and diagnosed with gender dysphoria over 35 years ago. The diagnosis of gender dysphoria is not the problem. The tragedy is failing to recognize and treat the deeper wounds of sexual abuse.

Many struggling individuals who request a change of gender are looking for an escape, a hiding place, or as one teenager confided to her mother who wrote to me for advice, a way to “erase” her troubled past. Caught in the grips of pain, they see a transgender identity as an appealing portal to a happier new life.

Stories like mine and 30 others in my new book “Trans Life Survivors” provide testimony that, for far too many, changing genders is not a life-long solution to the trauma of a difficult or abusive childhood. We discovered after surgery that the sex-change promoters had used us in a grand social and medical experiment.

A case in point is a lady named Deborah from Dorset, England, who contacted me recently and consented for me to share her story.

Deborah was sexually abused when she was only 2 years old by her father, whom her mother later divorced. In the years that followed, her older brother physically and verbally abused her while her mother looked the other way.

When Deborah was 14, her father came back into her life and seemed to be the model of an attentive dad—taking her on outings, lavishing her with gifts, and acting nice. So, when he invited her to spend a weekend with him, Deborah, feeling comfortable and happy about having her dad back in her life, accepted.

After his 14-year-old daughter was inside his home and secure in her bed, he did the unthinkable again.

Due to the intense trauma and emotional stress this caused, Deborah couldn’t focus on her studies or pursue the education that would lead to a good career. In adulthood, she barely eked out a living and made bad choices in relationships.

The pain from sexual abuse doesn’t go away on its own, and the victim often copes by escaping psychologically.

Deborah shares that at age 44, she was watching a television program whose topic quickly captured her attention: transgender men. She recalls thinking, “Wow, this must be me.”

She sought a doctor who specialized in the treatment of gender identity disorders, particularly transsexualism, and scheduled an appointment with a well-known British psychiatrist, Dr. Russell Reid with the National Health Service’s main gender clinic at Charing Cross Hospital in London.

Gender specialists typically have a major blind spot in discerning the influence child abuse has had on a patient’s desire to identify as the opposite gender. Deborah’s experience with Reid in 2002 illustrates this thoroughly.

I told him about my life, how abusive it was, he didn’t really seem concerned at all. He said, ‘I am sure you’re transgender. Let’s not waste any time,’ and injected me right there with Sustanon 250 mg, an anabolic testosterone steroid.

At the time, Deborah said she was happy. But upon reflection, she realized alarm bells should have been ringing, because Reid didn’t consider any of her horribly traumatic sexually-abusive life experiences as relevant to her gender distress. Instead, he hastily and recklessly gave her testosterone, a powerful male hormone.

She went on to receive surgeries to shape her body into that of a man, and lived as Lee, a trans man.

She now says she realizes she never had gender dysphoria, but was suffering from “body dysmorphia.” As she sees it, she hated her body because it caused her to be sexually abused.

Gender change was the tragic result of a misdiagnosis, not gender dysphoria.

Lee now wants to return to living as a female. Unfortunately, she is sporting a full beard and other male-identified characteristics. She’s on a waiting list for reversal procedures at The Laurels, the National Health Service gender clinic in Exeter, and has questions for her caregivers: Who in the U.K. will accept the consequences of this failed diagnosis? Will the National Health Service allow her to have the reversal procedures? Who will pay for the extensive electrolysis needed to remove her facial hair?

Out of all the people who have written me over the years wanting to undo the effects of gender transition, about half say childhood abuse was the key factor in wanting to erase and escape their past. They all say it worked for a while, but over the long term, it was not a solution for the pain of an abusive childhood.

Let’s all pray the clinic will do the right thing and help Deborah restore the life that was recklessly derailed in 2002.

More importantly, let’s demand that gender clinics everywhere stop this insanity of providing sex change for everyone who asks, without treating the contributing factors first.