House Leadership Should Allow a Vote Against Cronyism 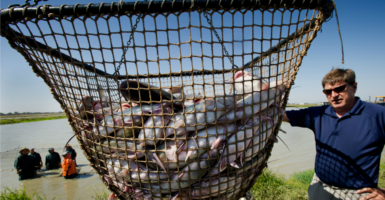 Will House leadership snatch defeat out of the jaws of victory? They have so far, by not holding a vote on legislation that would effectively eliminate the poster child for cronyism: the U.S. Department of Agriculture’s catfish inspection program.

There’s not much agreement in Washington, D.C., on many issues, but there’s widespread agreement about this protectionist scheme. The independent Government Accountability Office has repeatedly criticized the program. President Barack Obama called for eliminating the USDA catfish inspection program in his fiscal year 2014 budget. In May, the Senate, in a bipartisan manner, passed legislation that will effectively eliminate the program.

Now, because House leadership hasn’t even allowed a vote on the Senate legislation, 220 House members (as reported by Politico) from both parties —more than enough to pass the legislation—have come together to call on leadership to allow for a vote. It shouldn’t be this hard.

The question now is whether House leadership will do the common sense and proper thing and allow for a vote, or instead prevent its members from putting a stop to this harmful program.

This issue may seem small, but it is a great litmus test for whether House leaders care about cronyism. Further, the implications of this program are actually far-reaching.

The U.S. Food and Drug Administration inspects seafood. A provision was buried in the 2008 farm bill, however, that created a special exception so that catfish would be inspected by the USDA. Was this in response to a great catfish safety crisis? Nope. The FDA and Centers for Disease Control and Prevention consider commercially raised catfish to be a low-risk food. The Government Accountability Office has said such a switch to the USDA won’t improve safety.

So why is catfish going to be inspected by the USDA?

Bryon Truglio, a retired chief of the FDA’s Seafood Processing and Technology Policy Branch, explained the issue well, saying that “lobbyists and a trade association representing elements of the American catfish producers … [have] bullied Congress into moving catfish regulation to the USDA, making it harder for their foreign competitors to enter the U.S. market. This move is a win for U.S. catfish producers, but ultimately, a loss for American taxpayers and consumers.”

Moving catfish inspection to the USDA requires foreign countries to develop new catfish inspection schemes that are the regulatory equivalent of the more burdensome USDA system. If they don’t meet the USDA’s requirements, foreign exporters from various countries that currently supply the United States with catfish will be blocked from selling their catfish.

That may be nice for domestic catfish producers who will have less competition, but it’s bad for consumers who would likely face higher prices if the supply of catfish is reduced. This scheme is also bad for agricultural interests beyond catfish producers because they would be the ones who suffer any trade retaliation from foreign countries.

Other countries will certainly go to the World Trade Organization to file lawsuits against the United States. Vietnam has already expressed its concerns before the World Trade Organization. These countries will likely win. If somehow they don’t, then the United States will have set up the terrible precedent of using unsupported safety concerns as a pretext for blocking foreign competition. That won’t bode well when our own domestic agricultural producers are blocked from exporting their goods to other countries because of similar nontariff trade barriers.

The USDA program is also duplicative. Proponents argue that it isn’t duplicative because the USDA inspects catfish and the FDA inspects other seafood. This completely misses the point. There’s duplication because seafood processing facilities that process both catfish and any other seafood will have to deal with two different types of seafood regulatory schemes, instead of just one. This video is instructive on this point.

This is also just the tip of the big government iceberg when it comes to seafood. If the unnecessarily burdensome USDA scheme is used for catfish, it won’t be long until serious efforts are made to apply the same standards to other seafood.

It doesn’t happen often, but Congress has a real chance to get rid of a widely opposed protectionist program that will hurt agricultural producers and consumers. The only thing standing in the way isn’t a majority of the House expressing its will to keep the program. Instead, it is House leadership blocking its members from having a chance even to express its will in the first place.

A victory in the fight against cronyism is within reach. House leadership should immediately allow its members to seal the victory.