This Program Epitomizes Waste and Favoritism. Lawmakers Now Have a Chance to Repeal It. 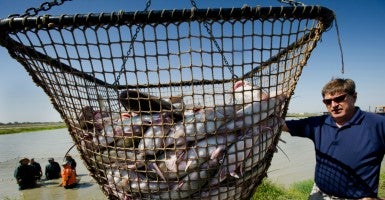 Do legislators truly care about waste and cronyism?

We may get a chance to see how serious (or not) legislators are about these issues if the Senate takes up an amendment to repeal the U.S. Department of Agriculture’s catfish inspection program as part of its consideration of the trade promotion bill.

Admittedly, it’s easy to think the issue is not that big of a deal and maybe even amusing. But this program is the epitome of waste, trade protectionism and favoritism for a narrow special interest at the expense of the public.

The Food and Drug Administration is responsible for inspecting both domestic and imported seafood. But in the 2008 farm bill, a special exception was created that requires the Department of Agriculture to inspect catfish. The program, which the department has estimated will cost about $14 million annually, will impose costly duplication because facilities that process seafood, including catfish, will be required to comply with regulations of both agencies. A final rule implementing the program could be published anytime.

The Government Accountability Office captured the problems with the program well: “[The catfish] inspection program would result in duplication of federal programs and cost taxpayers millions of dollars annually without enhancing the safety of catfish intended for human consumption.”

In addition, the program will hurt consumers by limiting competition and likely will harm industries by provoking retaliatory trade measures by foreign countries. The retaliation likely would come against industries other than the catfish industry, such as milk producers or meat packers.

There are several key points policymakers should bear in mind when considering the Department of Agriculture’s catfish program:

It could take several years to allow these foreign exports back into the U.S. During that time, domestic catfish farmers would have the market to themselves, driving up catfish prices.

Bryon Truglio, a retired chief of the Food and Drug Administration’s Seafood Processing and Technology Policy Branch, stated the problem well: “This group [‘lobbyists and a trade association representing elements of the American catfish producers’] has bullied Congress into moving catfish regulation to the USDA, making it harder for their foreign competitors to enter the U.S. market. This move is a win for U.S. catfish producers, but ultimately, a loss for American taxpayers and consumers.”

There likely will be trade retaliation because of the program, and industries other than catfish farmers will get hurt (milk producers, meat packers, etc.). Vietnam, which would be affected, has made its concerns well known. As reported by The New York Times: “‘Our government is unwilling to sit by as this program is implemented,’ the [Vietnamese] trade officials wrote, adding that American exports of beef, soybeans and other goods to Vietnam could suffer as a result.”

Repealing the USDA catfish inspection program should be a no-brainer. There are many achievable economic policy reforms that Congress could pass with wide support, but this should be one of the easiest.