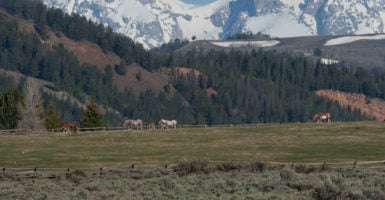 The Interior Department's inspector general surveyed 108 programs and found that 16 of them awarded a total of 701 grants in two years to purchase $815 million worth of land. (Photo: Epes/Zuma Press /Newscom)

Interior Department officials have no idea how much land they bought for $815 million, nor if the properties are being used for their intended purpose, a government watchdog reported.

The department’s officials couldn’t provide its inspector general with data about land purchase programs, the watchdog’s report said. The inspector general consequently surveyed 108 programs and found that 16 of them awarded 701 grants between 2014 and 2015 to purchase $815 million worth of land.

The Interior Department “does not centrally track information about grants awarded for the purpose of acquiring land,” the inspector general said, adding:

Additionally, less than half of the 278 grant recipients reported their land inventories to the department programs that funded them, which violated federal regulations, according to the Aug. 2 report.

With “less than 44 percent of grantees reporting … we are concerned that both the awarding agencies and the grantees are either unaware or noncompliant,” the report said.

The failure to provide inventories, it said, “coupled with the fact that [the Interior Department] is not tracking the awards centrally, could hamper monitoring efforts to ensure that land is being used properly.”

The inspector general found one case where a bar was built on conservation land and another where “a reservoir designated for breeding fish stock had been completely drained,” the report said.

The inspector general noted the data is likely incomplete, meaning the watchdog’s figures were likely underestimated. The “number of grants and land value could be substantially higher than what we were able to determine through our survey,” the report said.