Cross-Sex Hormones Are Steroids and Addictive 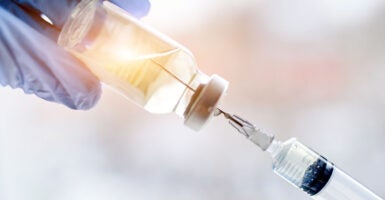 I hear from others like me who regret the efforts to try to transition and share a similar experience. Each habit-forming indulgence leads to the next. Cross-dressing leads to injecting cross-sex hormones, which leads to breast and genital surgery. (Photo: Ekaterina Goncharova/Getty Images)

A dirty little secret withheld from people who seek help for gender distress is that cross-sex hormones are anabolic steroids and addictive in the same way that daily consumption of alcohol can lead to addiction.

Gender clinics, now including Planned Parenthood, routinely prescribe cross-sex hormones on the first or second visit, and they neglect to disclose that steroids are addictive and distort one’s ability to make decisions. Steroid use makes people easy marks for the next step: surgery, such as mastectomy and genital reconfiguration, both of which mutilate healthy tissue.

By looking at transgender treatment protocols through the lens of addiction, we might just find a better way to help people to wholeness.

The Merriam-Webster dictionary defines addiction as “a compulsive, chronic, physiological or psychological need for a habit-forming substance, behavior, or activity having harmful physical, psychological, or social effects and typically causing well-defined symptoms (such as anxiety, irritability, tremors, or nausea) upon withdrawal or abstinence: the state of being addicted.”

Alcohol, drug, and steroid addiction certainly fit into this classification. I recognized the addictiveness alcohol can have some 35 years ago when I woke up lying in a park in Long Beach, California dressed as a woman, covered in my own vomit, the culmination of years of abusing alcohol.

At first, I strenuously denied I had a problem with every breath I had and shouted down anyone who said I was drinking too much or was an alcoholic. But by applying the 12 steps of Alcoholics Anonymous, and depending on my higher power (Jesus), gradually I came to see the indisputable evidence of my addiction to alcohol.

My need to consume alcohol was compulsive, chronic, and harmful. Physically, the alcohol had destroyed my lower esophagus such that I had to have a section removed. Psychologically and socially, I had alienated friends and harmed my wife and children with my drunken behavior.

Use of cross-sex hormones follows the same pattern

In retrospect, I see the powerful parallels between alcohol addiction and cross-sex hormone use.

Like so many aha moments, once seen, they can’t be unseen. My eyes opened wide, and I could no longer deny that taking cross-sex hormones was just like alcoholism, an addiction. Cross-gender hormones are powerful steroids that alter the brain and one’s psychological outlook.

I particularly see this played out among young adults who are in the early stage of pursuing gender change. Distraught parents contact me, desperate to help their children avert the coming train wreck. But unfortunately, once under the addictive influence of cross-sex hormones, people are as unreachable as I was when I was abusing alcohol, bent on self-destruction and deaf to any information that stands in the way.

My compulsive, chronic, psychological need to present as a woman escalated over time. I hear from others like me who regret the efforts to try to transition and share a similar experience. Each habit-forming indulgence leads to the next. Cross-dressing leads to injecting cross-sex hormones, which leads to breast and genital surgery.

Cosmetic surgery itself can be addictive, and the physical harm done is mostly irreversible.

I have 30 years of recovery from my ill-advised pursuit of a trans identity. I applied the same 12 steps of Alcoholics Anonymous to the trans-addiction that erases and destroys a person via hormones, surgery, and a new identity.

I realize that applying the definition of addiction to transgenderism will be scorned, dismissed, and shouted down, especially by the enablers who benefit financially: gender therapists who diagnose everyone with gender dysphoria and affirm everything transgender; drug companies who peddle cross-sex hormones (powerful steroids); surgeons who rearrange male and female genital like a sushi chef preparing a California roll.

I’m willing to risk it to help even one person recover his or her life.

It’s quite destructive to prescribe an addiction as a cure for anything. Yet I continually hear from distressed people who have been manipulated into adopting this quackery by the medical community.

I want this message to reach the ones who are pursuing this quixotic path. Consider that, like me, you could be addicted to cross-sex hormones, surgery, or even your own self-destructive behaviors because something happened to you, such as abuse (emotional, physical, or sexual), loss of friends or family through death or divorce, or whatever circumstance felt traumatic.

Escaping into an addicting, alternate identity is not the solution and can lead to harmful consequences, sadness, and depression.

Like any addiction, taking cross-sex hormones to identify as the opposite sex results in harmful consequences, sadness, and depression. My website sexchangeregret.com is a source of helpful information.

If you are a teen struggling with your gender identity, read my book “Kid Dakota and the Secret at Grandma’s House.”

If you’re an adult feeling the tug to live a transgender life, read my book “Trans Life Survivors” and break free from the addiction of transgender identity just as I did. It will be the happiest moment of your life—that I can tell you.