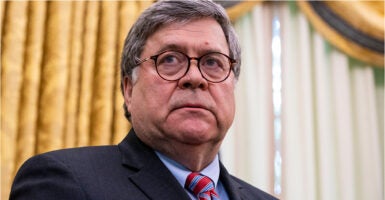 Attorney General William Barr said Thursday the Chinese government has achieved a “massive propaganda coup” by shaping the content coming out of Hollywood, while warning U.S. business executives against acting as agents of the communist regime in possible violation of foreign lobbying laws.

Speaking at the Gerald R. Ford Presidential Library, Barr offered a sober assessment of China’s efforts to “raid” U.S. companies and institutions with a goal of becoming the world’s lone superpower.

Barr went through several examples of movie studios and tech companies caving into pressure from Beijing to censor content that paints China in a negative light.

Barr pointed to the movie “World War Z,” which originally included a scene showing that the origins of a zombie apocalypse originated in China. Paramount Pictures ordered the scene removed from the movie at the request of Chinese authorities.

“This is a massive propaganda coup for the Chinese Communist Party,” Barr said.

“Hollywood is far from alone in kowtowing to the PRC. America’s big tech companies have also allowed themselves to become pawns of Chinese influence.”

Barr detailed steps that Apple, Zoom, and Google have taken to appease the Chinese government, such as self-censoring content available through their services.

Barr also said the Justice Department has seen an increase in party officials and their cut-outs working to “cultivate and coerce” U.S. corporate leaders in order to further China’s political objectives.

Barr said the Chinese government hides behind “American voices” in order to covertly “elevate its influence and put a ‘friendly face’ on pro-regime policies.”

“The legislator or policymaker who hears from a fellow American is properly more sympathetic to that constituent than to a foreigner. And by masking its participation in our political process, the PRC avoids accountability for its influence efforts and the public outcry that might result, if its lobbying were exposed.”

Barr also issued a thinly-veiled warning to U.S. business executives against working as foreign agents of the Chinese government.

“America’s corporate leaders might not think of themselves as lobbyists,” Barr said, adding, “but you should be alert to how you might be used, and how your efforts on behalf of a foreign company or government could implicate the Foreign Agents Registration Act.”

Barr explained that the law, known as FARA, requires Americans to register as foreign agents if they push policies that advance the interests of foreign governments.