Sen. Cruz Seeks to Flip the SCRIPT on Hollywood’s Kowtowing to Chinese Censors 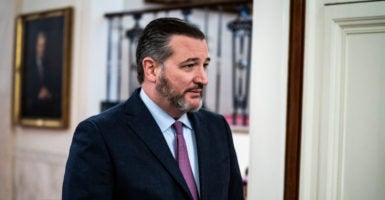 "For too long, Hollywood has been complicit in China's censorship and propaganda in the name of bigger profits," says Sen. Ted Cruz, R-Texas. (Photo: Jabin Botsford/The Washington Post/Getty Images)

A bill proposed by Sen. Ted Cruz, R-Texas, that seeks to dissuade Hollywood studios from submitting their movies to the censorship of the People’s Republic of China seems to strike the right policy balance.

It would limit government interference in businesses decisions, but exposes an outrage that most Americans likely are unaware of.

The Stopping Censorship, Restoring Integrity, Protecting Talkies Act (SCRIPT Act) would cut off any assistance by the Department of Defense to those film studios that submit their films to Chinese censors.

That sensibly withdraws government money from studios engaging in an act that harms Americans, but stops short of giving directives to private businesses.

Cruz said he would introduce the legislation when the Senate returns from recess.

The act is timely. As we have seen again with the coronavirus crisis, China’s communist government is obsessed with its external image, in the current instance suppressing the fact that the virus originated in its city of Wuhan and maintaining a level of secrecy that helped the virus spread globally.

With regard to Hollywood, China uses the lure of a market of 1.3 billion potential moviegoers to force studios to comply.

While China’s box office take has been badly hit in 2020 with movie theaters closed, in 2019, box office revenues rose 5.4% to a record $9.2 billion, according to Variety.

Cruz said in a statement:

From buying media outlets to broadcast propaganda into America to coercing Hollywood studios and sports leagues to self-censor by threatening to cut off access to one of the biggest markets for sports and entertainment in the world, the Chinese Communist Party spends billions and billions of dollars to mislead Americans about China and shape what our citizens see, hear, and think.

All of these activities are part of China’s whole-of-state approach to amass more influence around the world through information warfare, and we need to put a stop to it.

For too long, Hollywood has been complicit in China’s censorship and propaganda in the name of bigger profits. The SCRIPT Act will serve as a wake-up call by forcing Hollywood studios to choose between the assistance they need from the American government and the dollars they want from China.

The Texas senator is right.

Hollywood studios have for years responded by kowtowing to the Chinese government’s demands, sending over scripts for approval or even having censors on the set. Even worse is when studio heads self-censor.

One of Beijing’s biggest goals, whether it’s with its censorship of Hollywood scripts or its multifarious attempts to silence American academics, is to ensure that the People’s Republic of China is portrayed as a normal government, pretty similar to the democracies, when in fact it isn’t.

The Chinese regime imprisons its critics, lacks the rule of law, and is run by a Chinese Communist Party that’s not democratically elected.

Cruz is not the first official to raise this matter. In a private speech to the Motion Picture Association of America last year, Secretary of State Mike Pompeo promised Hollywood moguls that President Donald Trump would try to extend a level playing field to the industry, but asked in exchange that they “stop bowing to Chinese censors,” which he said limited the ability of Americans to understand the nature of the Chinese regime.

We wrote a paper back in 2015 on Hollywood’s submissiveness to China’s censorship, even as it preens its virtue-signaling here at home. In it, we recommended “an industry-developed code of conduct” that would reassure audiences that they are not being exposed to foreign propaganda.

China’s “efforts to influence Americans through academia and Hollywood represent an attempt by a foreign government to manipulate a democratic population whose opinions, translated through the ballot box, will inform public policy,” we wrote.

The seepage of Chinese propaganda into the mainstream of U.S. entertainment and news is a major problem. The Cruz bill is a very reasonable and timely countermeasure.