The Connection Between Hollywood and China 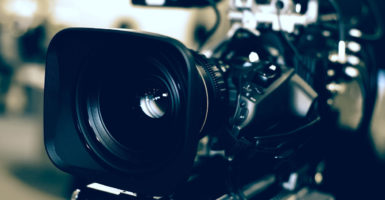 Don’t be fooled by the Americans behind the camera. In today’s Hollywood, there’s one director—and that’s China.

As important as U.S. audiences are, filmmakers know there’s a bigger one. And they’re willing to do anything they can to tap into it, even if it means becoming co-conspirators with one of the most evil censorship operations in the world.

It’s the biggest partnership no one knows about, and according to some experts, the most dangerous.

The majority of Americans probably have no idea when they buy a ticket to the latest blockbuster that the film they’re about to see was either partially financed by China or altered because of it.

In the last several years, there hasn’t been a more powerful influence over Hollywood than the communist regime—and with Chinese ticket sales set to overtake the U.S., the situation is only going to get worse.

There’s a sinister side to all of this, which is that the more Hollywood relies on China’s market to make movies, the more those movies are going to cater to the country’s demands.

The Heritage Foundation’s Mike Gonzalez has been tracking the major revolution in filmmaking because of the Chinese market and thinks more Americans need to be paying attention.

“Hollywood does all kinds of things to make sure they have a slice of the Chinese pie,” he told listeners on “Washington Watch.” “And they’re quite open about it. They don’t hide it. They’re quite happy to submit to the censorship of the Chinese Communist Party.”

“It goes something like this,” he explained. “In order for the U.S. film to crack the Chinese market, certain themes cannot be portrayed, certain products must be taken out, and certain speech must be limited.”

The process has become so rigorous that a lot of studios are actually flying over these Chinese censors to sit in on filming.

In some instances, entire scripts have been changed—either to conform to the communists’ messaging or showcase China in the best possible light.

Others try to save themselves the time and money of those overhauls by just co-producing their movies with the Chinese from the start—including, in 2018, some of the biggest box office successes: “Mission: Impossible – Fallout,” “Venom,” “The Meg,” and “Pacific Rim: Uprising.”

The obvious result of all this, Gonzalez argues, is that:

American audiences are being submitted to censorship—not our own censorship, but a foreign power’s censorship—and a Communist Party censorship.

We get shown a very benign view of China, in which China is a normal country, no different from Paris, or Britain, or Germany. That isn’t the case, obviously.

By letting China call the shots, these filmmakers have actually become complicit in the attack on free expression—their expression.

Just think about it, Gonzalez said:

How come there’s never been a movie about the Tiananmen Square massacre? That was drama there. There were students who were crushed by soldiers. There was blood, there was death, there was scheming.

This is a country with such suffocating strictness that even Winnie the Pooh is banned. Why? Because the government is worried he’ll be compared to President Xi Jinping. (Maybe they don’t want the world’s worst human rights abusers to look soft.)

Either way, Hollywood is going along with it, prostituting its voice—and America’s influence—in the process.

Of course, most people probably aren’t surprised that Tinseltown would sell its soul to make a few bucks. What they are amazed by is all of the political sanctimony from filmmakers here at home.

This is an industry in partnership with the Chinese government, a notoriously brutal regime, who’s turning around and telling places like Georgia: We’re not doing business with you because you passed pro-life laws.

Unbelievable. Hollywood has no problem climbing down from its moral high horse to sell tickets in China—where people are being viciously tortured and killed—but decides it can’t possibly ally itself with states that protect their own people.

They’d rather be a puppet of the communist state and its nightmarish record on human rights than support a democratic process that saves lives. That’s 100% hypocrisy no matter what language you speak.

If the entertainment industry wants to wrap itself in the Chinese flag, that’s literally its business. Just don’t be shocked when the alliance backfires. Because in a world of bad actors, the People’s Republic is the worst.