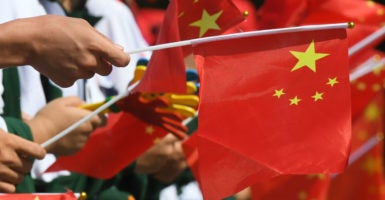 While many mainstream American media outlets allow themselves to be platforms for Chinese government propaganda, some work directly for the People's Republic of China. Pictured: Local residents hold Chinese flags Oct. 18, 2019, in the center of Qinzhou, China. (Photo: Artur Widak/NurPhoto/Getty Images)

As the world continues to battle the terrible COVID-19 pandemic that began in Wuhan, China, it also must battle the lack of information or outright disinformation coming from the government where the new coronavirus originated.

If it wasn’t already clear before the coronavirus outbreak, China is particularly aggressive in how it tries to control the spread of information, not just in regard to its own citizens, but people around the globe.

The COVID-19 pandemic has put these efforts on overdrive.

One eye-opener came when President Donald Trump got aggressive last week with a reporter from Phoenix Television, who first stated that Chinese companies such as Huawei and Alibaba have donated supplies to the U.S.

Then she asked the president:  “Are you cooperating with China?”

Trump responded by asking if she worked for China or if her company is owned by the Chinese state.

Despite her denial, the answer essentially is “yes.”

But Beijing’s influence is far wider than one small-time media outlet that most Americans never heard of.

Here are four major fronts on which China’s communist regime tries to spread influence and propaganda outside its borders.

While many mainstream American media outlets allow themselves to be platforms for Chinese government propaganda, some work directly for the People’s Republic of China.

Many of these publications have been working overtime as the Chinese government attempts to distract attention from its early handling of the COVID-19 outbreak and continues to mislead the world about what’s happening in China.

Peter Hasson, a reporter for The Daily Caller News Foundation, laid out what exactly Phoenix TV is and how it’s connected to the communist government of China.

Hasson found that, according to the outlet’s 2018 interim report, China Wise International Limited, a subsidiary of a bank run by the Chinese government, owns a minority stake in Phoenix TV.

Although Phoenix TV is not directly run by the Chinese government, it effectively is controlled by the government. The Hoover Institution, a conservative think tank, listed Phoenix TV in its review of the Chinese-language media landscape.

Hoover called Phoenix TV, which is based in mainland China as well as Hong Kong, a “quasi-official” media outlet of the Chinese government “with links to the [People’s Republic of China’s] Ministry of State Security.”

Despite this, the reporter who questioned Trump is a part of the White House Foreign Press Group and has regular access to press briefings at the White House.

As the Hoover Institution noted, however, Phoenix TV is hardly alone, as there are numerous other outlets directly or indirectly tied to the Chinese government.

One of those is China Daily, an official outlet for the Chinese government, which for decades has aggressively published propaganda in major newspapers such as The Wall Street Journal, The Washington Post, and The New York Times.

China has, of course, exerted its influence over social media and other widely used platforms.

TikTok, a rapidly growing social media app that allows users to post short videos, has come under scrutiny for its connection to China. TikTok is owned by ByteDance, a company based in China, though the service—like countless other social media and internet platforms—isn’t available in its home country.

But TikTok has a massive audience overseas. The app had been downloaded over 750 million times in a year, The New York Times reported in late 2019.

The parent company denies any kind of censorship or tracking of data; however, many accuse TikTok of doing both.

“There continues to be ample and growing evidence that TikTok’s platform for Western markets, including those in the U.S., is censoring content that is not in line with the Chinese Government and Communist Party directives,” wrote Sen. Marco Rubio, R-Fla., in a letter to the Treasury Department in October 2019.

The U.S. government’s Committee on Foreign Investment in the United States has launched an investigation into TikTok.

Zoom, which has become a massively popular video service in the time of the coronavirus, has had issues protecting customers from Chinese spies, U.S. intelligence officials told Time magazine.

“More than anyone else, the Chinese are interested in what American companies are doing,” Time quoted one of the anonymous officials as saying.

In particular, Zoom’s encryption service is what opens up the potential for Chinese spying. According to reports, as of April 18, the company will begin letting customers decide not to route their data through China, which Zoom’s CEO admitted was happening before.

The NBA isn’t the only organization that has become reliant on China’s business to the point that it is willing to let the communist regime intimidate its employees into censoring themselves.

As The Heritage Foundation’s Mike Gonzalez said on the “Heritage Explains” podcast, China has enormous power in Hollywood to shape what audiences there and elsewhere see.

The Chinese assert this power by funding movies, including blockbusters such as Tom Cruise’s “Mission Impossible: Fallout” in 2018, and demanding censorship so that movie studios can get access to the vast Chinese market.

Not only do movie studios bow to censorship, but they now preemptively self-censor to avoid the potential for losing Chinese sales and funding.

The takeover of Hollywood is just one element of how China uses our culture-making industries to promote its agenda.

Since 2003, hundreds of so-called Confucius Institutes have opened on college campuses around the United States. Their activities have included pressuring schools to shut down events featuring the Dalai Lama and generally shaping the narrative about Tibet, the Tiananmen Square massacre, and the existence of Taiwan.

The Confucius Institutes actually have little to do with Confucius, the ancient Chinese philosopher.

As Charles Horner wrote for the Claremont Review of Books, it would be more accurate to call them the “Mao Zedong Institutes,” after the China’s first communist dictator.

Although the Confucius Institutes operate under the guise of education, Horner noted, “they are really about keeping tabs on Chinese students in America, spreading propaganda, meddling in American politics generally, and performing espionage.”

A Chinese minister of propaganda, Liu Yunshan, said in 2010 that the institutes have a mission: “Coordinate the efforts of overseas and domestic propaganda, [and] further create a favorable international environment for us.”

According to Politico, Yunshan wrote:

With regard to key issues that influence our sovereignty and safety, we should actively carry out international propaganda battles against issuers such as Tibet, Xinjiang, Taiwan, human rights and Falun Gong.  … We should do well in establishing and operating overseas cultural centers and Confucius Institutes.

After Congress passed a bill limiting funding to schools that have a Confucius Institute, many of the institutes closed around the country.

In coming days, Americans and others around the world would do well to reexamine their connection and vulnerability to China’s ruthless communist government, which, in controlling its own population, injected a deadly pandemic into the global bloodstream.