The NBA’s Shameful Hypocrisy Over China 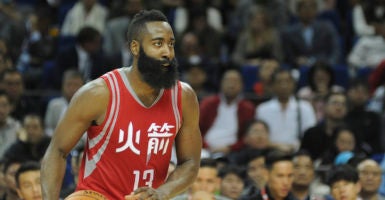 James Harden of the Houston Rockets drives the ball against the New Orleans Pelicans during a preseason game Oct. 9, 2016, as part of the Global Games in China at the Mercedes Benz Arena in Shanghai. (Photo: Visual China Group/Getty Images/)

Perhaps Americans will find a way to unite as the reality of living in a world with powerful, authoritarian regimes takes hold in the 21st century.

This simple statement of support for, well, democracy, was deemed unacceptable to China, which immediately condemned Morey and quickly began cutting all ties to the Rockets.

This was too much for the National Basketball Association. Morey immediately retracted his statement, and then the Rockets’ owner and the NBA issued statements of their own.

The NBA’s statement in Chinese was gallingly far more apologetic than the one in English.

And the owner of the Brooklyn Nets, Joe Tsai, co-founder of Chinese e-commerce company Alibaba, blasted Morey for his support of Hong Kong.

The hypocrisy is stunning.

The NBA has no problem stepping into politics when it involves domestic progressive social causes. The league moved quickly to pull the 2017 All-Star Game out of North Carolina because of state legislation ensuring that access to restrooms in government buildings would be determined primarily by biological sex.

The NBA also has a policy of allowing players to comment on politics and social causes if they wish.

This all flew out the window when the league was threatened with losing lots of money and getting shut out of the Chinese market.

Political dialogue is great unless the gravy train from an authoritarian state is cut off, it seems.

Celebrating the Betsy Ross flag is beyond the pale, but we don’t dare in any way contradict the whims of a brutal, police state regime that puts Muslims in concentration camps, forces women to have abortions, and throws citizens in prison for exercising their God-given right to free speech, among other atrocities.

Amazingly, this issue has united Americans on the left and right, as many politicians chimed in to lambaste Chinese censorship and the NBA’s sniveling response to it.

This incident does perhaps have one positive benefit. It reveals the fact that the Chinese government, like an octopus, is stretching its censors’ tentacles into every country on every issue large or small, browbeating free people into silence.

America, the shining city upon a hill, was the essential nation of the 20th century for all those who wish to be free. Only with the virtue and power of the United States could the free world triumph over the twin evils of fascism and communism.

We have to ask ourselves: Is this the world we want to live in?

Is America, the most powerful symbol of freedom, leader of the free world, now willing to bow and scrape to autocratic regimes to make sure the National Basketball Association can maximize its profits in a foreign market?

Perhaps this reality is waking Americans up to the threat of advancing authoritarianism.

Sen. Josh Hawley, R.-Mo., said in a letter Monday to the NBA, calling on it to oppose censorship of employees:

Remember that some things are more important than money. Remember your responsibility. You may not think of your League as an American undertaking, but whatever you think, what you say and do represents America to the world. And for an American organization to help the most brutal of regimes silence dissent in pursuit of profit is appalling.

The message should be: Our freedom is not for sale.