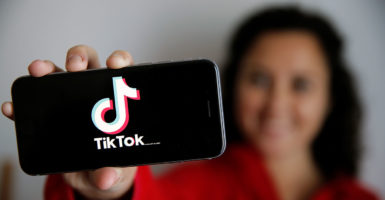 The Chinese-owned social media app TikTok, which temporarily banned a U.S. pro-life organization, is becoming a major conversation hub in the abortion debate.

Many young American adults have begun using TikTok as a platform to present political opinions, increasingly on the topic of abortion.

“Live Action joined TikTok in 2019 as part of our ongoing efforts to reach the upcoming generation with the truth about abortion and to continue to establish ourselves as digital leaders in the nonprofit space,” Alison Centofante, Live Action’s director of external affairs, said in an email to The Daily Signal.

TikTok, which allows users to post short videos ranging in length from a few seconds to a minute, has risen in prominence as it opened a new channel for conversation.

The Chinese company ByteDance owns TikTok and developed the app from an older one, Musical.ly, after buying it in August 2018.

ByteDance’s ownership prompted skepticism among those concerned about China’s reputation for stealing data. Last month, the Interior Department decided to halt the use of nearly 1,000 drones because some of the parts were manufactured in China.

ByteDance was the No.1 downloaded app on iTunes’ App Store in the first quarter of last year, with 33 million downloads. The conversation around abortion has grown with it.

“We have seen amazing engagement from users,” Live Action’s Centofante said. “This next generation is more pro-life than ever as they see the abortion industry exposed and the logic of the pro-life movement shared.”

Live Action, an Arlington, Virginia-based nonprofit that says its goal is to inspire a culture that respects human life, makes the most pro-life content for TikTok.

Live Action came out on top in the recent banning flap. According to the organization, TikTok notified it at 2:30 p.m. Jan. 31 that one Live Action video violated TikTok’s “community guidelines,” necessitating its removal from the app.

Approximately half an hour later, Live Action said, TikTok informed the organization that its account was banned due to multiple violations of the guidelines, but did not explain further.

Little over an hour later, however, at 3:36 p.m., Live Action President Lila Rose issued a statement saying that TikTok had reinstated the account.

Live Action has used Instagram and Facebook as platforms to spread its message for years. After adding TikTok to its social media outreach last year, Live Action has posted nearly every day in recent months.

Live Action’s page, which identifies the organization as a “new media movement dedicated to ending abortion,” has garnered a significant following of 21,000, with 392,400 “likes” for its videos.

Pro-choice videos on TikTok are limited to independent users, rather than organizations. Examples include a video from the user @lollygagginlollipop in which she describes her personal experience.

A caption below the video reads: “I stumbled into pro-life TikTok again. Just here to humanize the people who’ve had an abortion. We aren’t murderers. #prochoice #abortion.”

This report and the headline were modified within 20 hours of publication to emphasize TikTok’s growing popularity in the abortion debate.