What You Need to Know About Attorney General Nominee Jeff Sessions 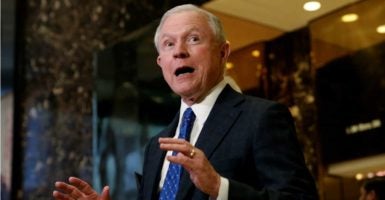 Sen. Jeff Sessions, R-Ala., has been tapped by President-elect Donald Trump to be the next U.S. attorney general. He previously served in that role for Alabama, and was also a federal prosecutor before his election to the Senate.

Sessions was the first senator and among the only members of Congress to endorse Trump during the Republican presidential primary.

This will mark the third time he has gone before the Senate Judiciary Committee. The last time he faced Senate confirmation in 1986, the committee never reported his nomination to the full Senate and Reagan later withdrew it, even though Republicans had control of the chamber at the time.

Sessions is in a more favorable position today. He is a senior member of the Senate Judiciary Committee that once turned him down for a judgeship. That committee, now led by Sen. Chuck Grassley, R-Iowa, will conduct his confirmation hearing for attorney general.

“It is an honor to nominate U.S. Sen. Jeff Sessions to serve as attorney general of the United States,” Trump said in a statement. “Jeff has been a highly respected member of the U.S. Senate for 20 years. He is a world-class legal mind and considered a truly great attorney general and U.S. attorney in the state of Alabama. Jeff is greatly admired by legal scholars and virtually everyone who knows him.”

“I am humbled to have been asked by President-elect Trump to serve as attorney general of the United States,” Sessions said in a statement.

He added, “I enthusiastically embrace President-elect Trump’s vision for ‘one America,’ and his commitment to equal justice under law. I look forward to fulfilling my duties with an unwavering dedication to fairness and impartiality.”

Here are few things to know about Sessions.

Sessions was born on Christmas Eve 1946 in Selma, Alabama, and was an Eagle Scout by the time he was 18. He earned a bachelor of arts at Huntingdon College and a law degree from the University of Alabama in 1973.

Sessions is a Sunday school teacher at the Ashland Place United Methodist Church in Mobile and has been a delegate to the annual Alabama Methodist Conference.

“My previous 15 years working in the Department of Justice were extraordinarily fulfilling,” Sessions said in his statement Friday. “I love the department, its people, and its mission. I can think of no greater honor than to lead them. With the support of my Senate colleagues, I will give all my strength to advance the department’s highest ideals.”

In 1986, Reagan nominated Sessions to be a U.S. district judge for the Southern District of Alabama. The Senate was in Republican hands at the time, but then-senior Judiciary Committee member Sen. Ted Kennedy, D-Mass., targeted Sessions as a “throwback to a shameful era, which I know both black and white Americans thought was in our past.”

During that Senate hearing, a former assistant U.S. attorney named Thomas Figures, an African-American, said Sessions called him “boy,” and told him to watch himself around “white folks.” Figures also accused Sessions of opposing the NAACP and the Southern Christian Leadership Council.

Sessions denied the allegations, but eventually withdrew his nomination and continued to serve as U.S. attorney.

In 1996, Sessions beat Democrat Roger Bedford for an open Alabama U.S. Senate seat. His victory marked the first time since Reconstruction that Alabama had two Republican senators. His colleague, Alabama’s senior Sen. Richard Shelby, was elected as a Democrat and switched parties.

In 2002, Sessions won a second term, beating Democrat State Auditor Susan Parker. In the race for his third term, his challenger was Democrat state Sen. Vivian Davis Figures, the sister of the former assistant U.S. attorney who helped torpedo his judicial nomination. Sessions easily defeated Figures in 2008, and he was uncontested in his 2014 bid for a fourth term.

In the Senate, Sessions became a member of the Judiciary Committee that once rejected his nomination to be a district judge. In the first two years of the Obama administration, Sessions was the ranking member and opposed the confirmation of Sonia Sotomayor and Elena Kagan to the U.S. Supreme Court.

He was also strongly opposed to legislation in 2007 to grant legal status to illegal immigrants. Sessions has been a major proponent of E-Verify, a system designed to prevent illegal immigrants from getting jobs, and a border wall well before Trump made it central to his campaign.

He was also the ranking member of the Senate Budget Committee and serves on the Senate Armed Services Committee.

Sessions wrote the Honoring Every Requirement of Exemplary Service (HEROES) Act, which President George W. Bush signed into law in May 2005.

Sessions’ Senate website refers to him as a “strong environmentalist” because he was responsible for legislation that added the Mountain Longleaf National Wildlife Refuge near Anniston. He wrote legislation expanding protections for the Dugger Mountain in the Talladega National Forest.

Also, the Obama administration—at Sessions’ urging—formed a working group to assess mercury pollution in the Gulf of Mexico. These actions helped him win the Coalition of Republican Environment Advocates Teddy Roosevelt Environmental Award.

This story was updated to clarify Sessions’ 1986 nomination to a federal judgeship.