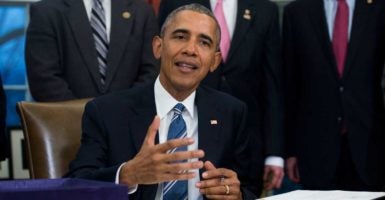 The Congressional Review Act may be used to overturn numerous regulations from the Obama administration. (Photo: Polaris/Newscom)

Conservatives in Congress have a plan to undo a large number of regulations from the last few months of President Barack Obama’s time in office.

Both of these new rules, along with a host of others, may be able to be undone with the help of the Congressional Review Act.

This law was passed in 1996 as part of the Small Business Regulatory Enforcement Fairness Act and then-Speaker Newt Gingrich’s Contract with America reform agenda.

It requires agencies to update Congress on the rules they write and “provide Congress with a special set of procedures under which to consider legislation to overturn those rules”.

For a rule to be appealed under the Congressional Review Act, those disapproving of the rule must first present a report to the House, Senate, and comptroller general.

According to the Congressional Research Service, this report must contain “a copy of the rule; concise general statement relating to the rule, including whether it is a major rule; and the proposed effective date of the rule.”

Once this report is received, the House and Senate must pass a “joint resolution of disapproval” that would go to the president for approval or veto.

If vetoed by the president, Congress still has one more shot at the resolution by voting to overturn the veto with a two-thirds vote in each chamber.

So far, the Congressional Review Act has aided in the overturning of one rule.

The Hill reported that in 2001, Congress was able to successfully repeal a rule on workplace injuries that was issued by the Occupational Safety and Health Administration (OSHA). Since then, according to the Congressional Research Service, OSHA has not tried to reinstate a similar version of this workplace injuries rule.

James Gattuso, a senior research fellow who studies regulatory issues for The Heritage Foundation, said that the Congressional Review Act has not been successful in the past because of the administration in power.

“The problem that became apparent after the [Congressional Review Act] was adopted was that the president will almost never be in a situation where he wants to disapprove of regulations from his own agencies,” Gattuso told The Daily Signal in a phone interview.

Then-Republican President George W. Bush was the reason the Congressional Review Act succeeded in repealing the OSHA rule in 2001.

Gattuso said of the law’s potential success on a larger scale:

The Democratic president [has] adopted just slews of regulations all within the past few months. So all those new rules, there are dozens of them, are eligible to be reviewed under the [Congressional Review Act]. And, when they’re submitted to the president, they’ll be submitted to a Republican president who will have no hesitancy in signing a lot of these.

According to Gattuso, conservative lawmakers are likely to have more success with using the Congressional Review Act due to incoming President-elect Donald Trump.

Constitutionally, the president has to be involved in any legislative decision meant for his possible veto. The one example where that was not a barrier was in 2001, when there was a change of administrations and a Clinton administration rule was rescinded. Now, we have that same situation for really the first time since then that there is a new Republican president coming in with an outgoing Democratic president.

According to a report released by The Heritage Foundation’s Gattuso and Daren Bakst, the Congressional Review Act will be able to address regulations handed down by Obama dating back to June 3, 2016.

With Trump, Gattuso said he believes that lawmakers will have significant success in undoing “slews” of regulations that the Obama administration has set in place. He said that the Congressional Review Act is the “most powerful tool that Congress has … it is a powerful weapon.”

Rep. Mark Meadows, R-N.C., the recently elected chairman of the House Freedom Caucus, is spearheading the effort to address regulations put in place by the Obama administration through the utilization of the Congressional Review Act.

As part of this effort, the House Freedom Caucus has released a special report, “First 100 Days: Rules, Regulations, and Executive Orders to Examine, Revoke, and Issue” that outlines the regulations that conservative lawmakers are planning to take down with the help of the Congressional Review Act and a new presidential administration.

These include regulations present in the National School Lunch Program and
School Breakfast Program, the National Organic Program, and the Animal and Plant Health Inspection Services program.

In total, the report currently lists 228 rules that the House Freedom Caucus is looking to address.

“We expect it to get to 300 rules and regulations by the time that Jan. 20 rolls around,” Meadows said.

According to Meadows, the Congressional Review Act will not apply to all of the rules listed in the report, but instead will be a significant starting place.

“The Congressional Review Act will only apply to some of those, but the ones that it does apply to actually [have] a more far-reaching and lasting impact,” Meadows said.

Meadows said that the Congressional Review Act works best when used in concert with a conservative administration.

“It only works if you have a conservative in the White House or someone of the same party or it can be deployed as well, but it has to have a two-thirds majority … So, [the Congressional Review Act] is an exciting tool that is rarely used, but as we get prepared to use it on the overtime rule and hopefully a couple of others that have been a result of executive overreach, we’ll get to see it actually used perhaps for the first time in more than a decade,” Meadows said.

Not surprisingly, efforts are being made to enact more regulations before Trump takes office.

According to the Competitive Enterprise Institute, institutions such as the Environmental Protection Agency are trying to push through more restrictive policies before the presidential inauguration. The EPA is currently attempting to pass fuel economy standards before Trump’s inauguration in January.

However, Meadows said that due to his recent discussions with the Trump transition team, the president-elect’s administration is already aware of and planning to address the regulations imposed by the Obama administration.

“I will say this,” Meadows said. “Talking to some individuals with the Trump transition team, they are taking this extremely serious, and certainly will make it a priority so that excitement on behalf of Americans from coast to coast is well placed ‘cause I know that the Trump administration will have it as a high priority,” Meadows said.