President Obama Evolves on Marriage. And He Wants the Constitution to ‘Evolve’ With Him. 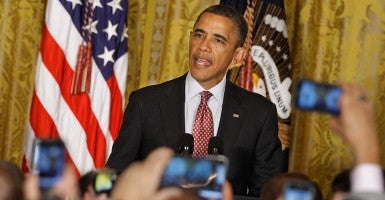 President Obama has evolved on marriage.

“Ultimately, I think the Equal Protection Clause does guarantee same-sex marriage in all 50 states,” Obama told the New Yorker.

This is a case study in how liberals “evolve” on policy. First they embrace a policy change. If they can’t convince a majority of Americans to vote for their preferred policy, they discover that the Constitution requires their preferred policy. So, according to the Obama of today, the Obama of early 2012 held an unconstitutional view of marriage. Or, perhaps, it wasn’t unconstitutional back then but it is now.

But this isn’t how the Constitution works.

Sen. Ted Cruz, R-Texas, explained earlier this month what the Equal Protection clause of the 14th Amendment means in the marriage context:

It is beyond dispute that when the 14th Amendment was adopted 146 years ago, as a necessary post-Civil War era reform, it was not imagined to also mandate same-sex marriage…. [It is a] preposterous assumption that the People of the United States somehow silently redefined marriage in 1868 when they ratified the 14th Amendment.

Nothing in the text, logic, structure, or original understanding of the 14th Amendment or any other constitutional provision authorizes judges to redefine marriage for the Nation. It is for the elected representatives of the People to make the laws of marriage, acting on the basis of their own constitutional authority, and protecting it, if necessary, from usurpation by the courts.

Scalia had proffered some possible dates: “1791? 1868, when the Fourteenth Amendment was adopted? Sometimes–some time after Baker, where we said it didn’t even raise a substantial Federal question? When–when–when did the law become this?”

Finally, Scalia asked, “50 years ago, it was okay?” And Olson responded: “I–I can’t answer that question.” And Scalia then pounced: “I can’t either. That’s the problem. That’s exactly the problem.”

And as Chief Justice John Roberts pointed out at the time:

I’m not sure that it’s right to view this as excluding a particular group. When the institution of marriage developed historically, people didn’t get around and say let’s have this institution, but let’s keep out homosexuals. The institution developed to serve purposes that, by their nature, didn’t include homosexual couples.

As former Attorney General Ed Meese and I argued last month in The Washington Post, in a system of limited constitutional self-government, the people and their elected representatives should be making decisions about marriage policy. While there are reasonable arguments on both sides of this debate, there is nothing in the Constitution that requires the redefinition of marriage—unlike, for example, the case of interracial marriage. Judges should not insert their own policy preferences about marriage and declare them to be required by the Constitution.

Citizens are, of course, free to redefine marriage policy to include same-sex relationships, but so too should citizens be free to retain in law the historic definition of marriage as the union of a man and a woman—as citizens in a majority of states have done.

Nothing less than the future of our society and the course of constitutional government in the United States are at stake. And as Obama’s latest evolution shows, we’re not only redefining marriage, we’re redefining our Constitution—making it a living, breathing, evolving document.