Conservatives Split From GOP Leaders Over Timing of Obamacare Repeal 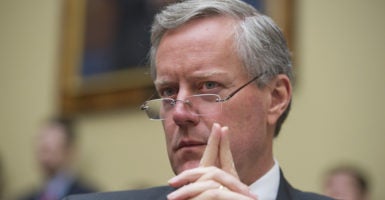 Rep. Mark Meadows, R-N.C., is pushing for a repeal of Obamacare during Congress' first 100 days. Meadows, who just took over as chairman of the House Freedom Caucus, said GOP lawmakers can then implement a replacement plan within 17 to 18 months. (Photo: Tom Williams/CQ Roll Call/Newscom)

Though Republicans are settled on getting rid of the Affordable Care Act, fault lines have emerged between GOP lawmakers who disagree on when exactly the health care law should be repealed and, to a lesser extent, which Obamacare provisions to include in the reconciliation bill.

On one side are Republicans like Sens. Orrin Hatch of Utah and Susan Collins of Maine, who have said they would like to see enactment of Obamacare’s repeal delayed until 2019 or beyond, which would give the GOP-led Congress time to craft, pass, and implement a replacement for the health care law.

“I’d like to do it tomorrow, but reality is another matter sometimes,” Hatch, who chairs the Senate Finance Committee, told The Washington Post. “We have to live with the real world, and the real world right now is that the Democrats won’t help with anything.”

But opposite those Republicans are conservatives like Reps. Mark Walker and Mark Meadows, both from North Carolina, who want to see repeal enacted in the first few months of Trump’s administration.

“We need to show some urgency,” Walker told The Daily Signal. “I won’t put it in how many days, but over the first few months, the repeal needs to be enacted out of the gate.”

Unlike Walker, who will take over as chair of the Republican Study Committee next year, Meadows has mapped out a timeline to repeal the health care law within Congress’ first 100 days, then pass and implement a replacement over a span of roughly 17 months.

“We need to have a very aggressive timeline on repeal,” Meadows, who recently took over as chairman of the House Freedom Caucus, told The Daily Signal. “What I would be hopeful for is a replacement that would come shortly after that, but to combine the two would be a mistake in that it would slow down the repeal process.”

Republicans plan to use reconciliation—which allows a bill to pass the Senate with just 51 votes—to repeal Obamacare, and are looking to pass a reconciliation bill during the first days of the 115th Congress, which begins Jan. 3.

They now have the support of the White House.

During an interview with radio host Hugh Hewitt on Wednesday, Reince Priebus, President-elect Donald Trump’s incoming chief of staff, signaled that the Trump administration agrees that Congress should use reconciliation within the administration’s first nine months to repeal Obamacare.

“We’re probably going to lead with Obamacare repeal and replace,” Priebus told Hewitt. “Then we’ll have a small tax reform package at the end of April. So I think what you’re looking at between two tax reform packages and reconciliation in the first nine months … what essentially comes down to three basically different budget packages.”

Though most agree that the dismantling of the 2010 health care law should come before Congress starts to tackle the proposal to replace Obamacare, others say that a delayed enactment for repeal occurring in 2019 or beyond would ease the transition for those currently enrolled in plans purchased on the exchanges.

Under Meadows’ timeline, leaders in the House and Senate would draft reconciliation instructions—which tell budget leaders what to include in the bill—and pass the legislation within their first 14 legislative days.

Repeal would then take place within the first 100 days, which Meadows said would provide insurers time to begin crafting plans for 2018 that aren’t required to adhere to the insurance mandates created by the Affordable Care Act.

Those regulations, opponents of the health care law say, caused the cost of premiums to rise.

Under Meadows’ plan, implementation of a replacement would happen over the span of roughly 17 to 18 months, which would allow the Trump administration to work through new regulations for the 2019 plan year.

“Adjusting in six months, that’s a herculean leap,” Meadows said. “Adjusting in a 17- to 18-month time frame is certainly something that all the insurance providers can do, and they’ve been asked to do much more in adjusting to the Affordable Care Act with less specificity coming from the Department of Health and Human Services.”

Already, Meadows said he is seeking input from at least two insurance providers on a viable plan to repeal and replace the law.

While the North Carolina Republican believes their contribution will present congressional leaders with a “compelling case” as to why the law needs to be rolled back quickly, he’s adamant that leaving it in place for even a few years will hurt consumers.

“A gradual wind down will still create perverted markets with regards to health insurance,” Meadows said. “I don’t know of any argument that would suggest that a three- to five-year wind down will make it less onerous on the American people.”

A Place to Start

Budget leaders and staff are already discussing what should be included in the reconciliation bill that would repeal Obamacare, and they’re using the legislation crafted in 2015 and subsequently passed by Congress as a blueprint.

That reconciliation bill repealed the individual and employer mandates, Medicaid expansion, and Cadillac and medical device taxes. The legislation also stripped the government of its authority to operate the federal and state-run exchanges, and lessened the fine for failing to comply with the mandates to $0, which was needed to abide by Senate rules.

Through that legislation, Republicans already charted a successful course for repealing Obamacare, one that received the stamp of approval from the Senate parliamentarian.

But both Walker and Meadows, along with Sen. Mike Lee, R-Utah, believe that the bill crafted next year should go further.

“That’s the minimum,” Walker said of the 2015 bill. “That needs to be the starting place, not the ending place.”

In an op-ed for National Review, Walker and Lee called for the next reconciliation bill to also repeal Obamacare’s insurance mandates, which include the essential health benefits requirement, the ban on limiting or denying coverage to consumers with pre-existing conditions, and the contraception mandate.

“When government bureaucrats and politicians decide that every insurance policy must cover free doctor visits and abortifacients, Americans who don’t need those options end up paying more for products they don’t want,” Walker and Lee wrote. “That’s great for the insurance companies, but not for taxpayers or consumers.”

Abortifacients are drugs that cause abortions.

There is skepticism as to whether a repeal of the insurance mandates would pass muster with the Senate parliamentarian, who has the authority to strike out parts of a reconciliation bill.

But the trio of Republicans believe that lawmakers should at least attempt to eliminate the mandates.

“To leave some of these aspects in place is not an excuse the American people are ready to accept,” Meadows said.

Both Meadows and Walker told The Daily Signal that though they would like to see a reconciliation bill for next year go further than that passed in 2015, they would still support a bill that mirrors the one crafted more than one year ago.

But Sen. Rand Paul, R-Ky., is threatening the GOP’s ability to pass the budget resolution—one that would include the reconciliation instructions to repeal Obamacare.

In an op-ed in Time, Paul pledged to vote against the budget resolution.

“I will not vote for any budget that doesn’t have a plan to balance, regardless of what is attached to it, and I’m calling on other conservatives in the Senate to take the same stand,” the Kentucky Republican said.

Just 51 votes in the Senate are needed for the budget to pass, and Republicans hold 52 seats in the 115th Congress.

Democrats and independents hold a total of 48 seats, so if Paul and one other GOP senator decide not to support the fiscal roadmap, Vice President-elect Mike Pence would be the tiebreaker.

But waiting for Pence to vote would mean the bill repealing Obamacare couldn’t be voted on until after he and Trump are sworn into office on Jan. 20.

So far, it doesn’t appear that Paul has support from other conservatives.

Meadows and Walker said they support Paul’s calls for a balanced budget, but wouldn’t go so far as to oppose the budget resolution that would be the vehicle for Obamacare’s repeal.

“Am I with him in terms of believing that a debt ceiling increase and a future budget must balance and must be on a path to balancing? Without a doubt,” Meadows said, “so it may be more a tactical question of difference versus a strategic question that we differ on.”

Additionally, many conservatives in both chambers, including Lee, voted in support of the budget resolution for 2016 specifically because it instructed congressional leaders to draft a reconciliation bill repealing Obamacare.