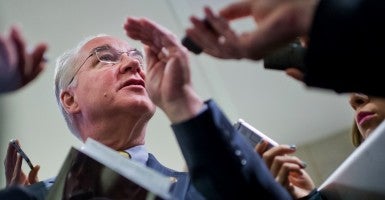 The House Rules Committee removed a problematic provision in a budget reconciliation bill Wednesday night that the Senate parliamentarian warned would make the legislation dead on arrival in the Senate.

The provision, which would have repealed the Independent Payment Advisory Board, was dropped at the request of Budget Chairman Tom Price, R-Ga.

Had the House included the provision, which was created in the Affordable Care Act, the Senate parliamentarian said it would be blocked from moving forward as a reconciliation bill.

A senior Republican Senate aide confirmed to The Daily Signal earlier this week that “Senate Parliamentarian Elizabeth MacDonough told Senate leadership and Budget Committee staff that the House reconciliation bill repealing five provisions of the Affordable Care Act violates the Byrd Rule, which requires that reconciliation bills have a budgetary effect. As a result, the legislation would be subject to cloture votes at a 60-vote threshold.”

Specifically at issue was the Affordable Care Act’s Independent Payment Advisory Board. “According to the aide, MacDonough referenced the previous Senate parliamentarian ruling in 2010 that the Independent Payment Advisory Board violated the Byrd Rule and pointed to that precedent when telling Senate leadership that the reconciliation bill would not pass muster in the Senate,” The Daily Signal reported.

Under the Byrd Rule, senators can object to measures of a reconciliation bill that don’t alter revenues or spending. Senators can push back on the legislation if they feel that it includes “extraneous matter.” If the Senate parliamentarian agrees, the provision in question is stricken from the bill.

House Republicans are attempting to repeal key pieces of the Affordable Care Act in this year’s bill.

The current bill includes measures to repeal the employer mandate, the individual mandate, the medical device tax, and the Cadillac tax. It also places a one-year moratorium on federal funding for Planned Parenthood and rescinds leftover money in the Prevention and Public Health Fund.

According to Politico, the White House issued a veto threat last night, warning that the bill would “take away critical benefits and health care coverage from hard-working middle-class families.”