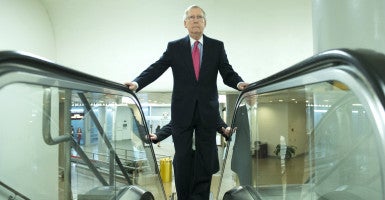 The Senate passed a reconciliation package, 52-47, rolling back key provisions of Obamacare. The House is expected to pass the legislation, but the White House issued a veto threat. (Photo: Kevin Dietsch/UPI/Newscom)

In a move that gets Republicans closer to landing a bill repealing Obamacare on President Barack Obama’s desk, the Senate passed a bill Thursday night rolling back key provisions of Obamacare and placing a one-year moratorium on funding for Planned Parenthood.

Using a budget tool called reconciliation, which allows a bill to pass with 51 votes, the Senate passed the legislation 52-47. Two Republicans voted against the legislation, and Sen. Bernie Sanders, I-Vt., did not vote.

In addition to stripping Planned Parenthood of its federal funding for one year, the reconciliation bill also guts Obamacare’s employer and individual mandates and lessens the fines for failing to comply with each to $0. It also repeals the Cadillac and medical device taxes and Medicaid expansion and tax credits and removes the federal government’s authority to run the exchanges.

After the reconciliation package passed, conservatives praised the Senate’s version of the legislation, which differed substantially from that passed by the House in October.

Obamacare is an expensive disaster that’s leaving consumers with fewer choices and higher costs, while trying to force taxpayers to bail out health insurance companies that aren’t realizing the profits they were once promised by the Obama administration. By working with other conservatives, we’re putting an Obamacare repeal and replace bill on President Obama’s desk that goes as far as possible in getting rid of this disastrous law, and that is why I supported it.

Rubio, along with Sens. Ted Cruz of Texas and Mike Lee of Utah, originally said he couldn’t support the House’s version of the reconciliation bill, which left in place the Medicaid expansion and subsidies.

“For too long, Democrats did everything to prevent Congress from passing the type of legislation necessary to help these Americans who are hurting,” McConnell, R-Ky., said on the Senate floor Thursday. “Today, that ends.”

The House is expected to pass the Senate’s version of the reconciliation package, sending the bill to the president’s desk.

However, the White House announced earlier this week it would veto the repeal legislation.

See how your senator voted on the reconciliation package below.