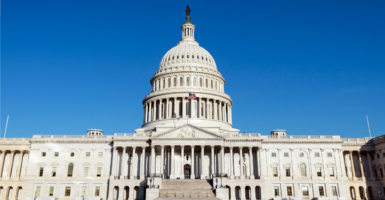 The amendment, offered by Rep. Steve Russell, R-Okla., was originally included in the House-passed version of the NDAA and applies decades-old religious exemptions from Title VII of the Civil Rights Act (1964) and the Americans with Disabilities Act (1990) to federal grants and contracts. (Photo: John Greim/John Greim Photography/Newscom)

Congress may have just removed an important religious liberty provision from a major bill.

Reports have surfaced that House and Senate members of the conference committee negotiating the final version of the National Defense Authorization Act (NDAA) have caved to the Obama administration’s veto threat and stripped the Russell Amendment, which would prevent the government from revoking contracts and grants from faith-based social service providers whose internal staffing policies reflect their faith, from the final version of the bill.

The amendment, offered by Rep. Steve Russell, R-Okla., was originally included in the House-passed version of the NDAA and applies decades-old religious exemptions from Title VII of the Civil Rights Act (1964) and the Americans with Disabilities Act (1990) to federal grants and contracts.

In other words, it shouldn’t have been controversial.

Faith-based organizations have proven they are often the very best at providing social services precisely because they are faith-based. They also have a right to retain their religious identity—a right that is not forfeited simply because they operate in public life.

Consequently, Title VII of the Civil Rights Act has for decades specifically protected these organizations’ ability to hire those who will abide by their religious precepts (a system that has been affirmed by the Supreme Court) and thereby preserve their religious identity. The Russell Amendment simply applies this long-standing policy to federal grants and contracts.

Unfortunately, President Barack Obama and objectors to this system have managed to strong-arm conference negotiators to allow government to discriminate against religious organizations that employ people who agree to live in accordance to their faith.

Though the outgoing administration has been eager to use executive action to discriminate against religious social service providers that interact with the government, President-elect Donald Trump has promised to defend religious liberty.

But executive orders alone are not sufficient: Ultimately, Americans need permanent protection from a hostile regulatory state. The incoming Congress should prioritize religious liberty and send Russell Amendment language to the president-elect’s desk, whether as an amendment to another bill or as stand-alone legislation.

The amendment reflects the best of our traditions without taking anything away from anyone, and is a commonsense continuation of policy that has served our diverse society well since 1964.