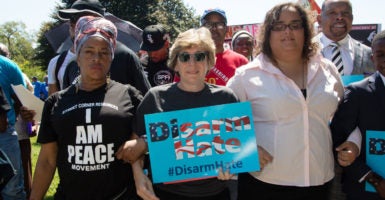 Randi Weingarten (center), speaks at an LGBT summit in Washington, D.C., one week after the 2016 election. (Photo: Jeff Malet Photography/Newscom)

The president of one of the nation’s largest teachers’ union cited the Holocaust in comments she made about President-elect Donald Trump while speaking at an LGBT event in Washington, D.C., on Wednesday.

“After what happened in the 1930s and ’40s, we used to have a saying called ‘never again,’” Randi Weingarten, president of American Federation of Teachers, said in front of an audience, adding:

Weingarten was elected president of the American Federation of Teachers in 2008.

The union represents 1.6 million members and advocates on behalf of teachers and other education professionals throughout the country.

Not every teacher is required to be a member of the union. However, in nearly two dozen states, unions can require workers to pay a majority of the union dues.

Weingarten endorsed Hillary Clinton for president on behalf of the American Federation of Teachers in July, and since then has been an outspoken supporter.

Looking back at the 2016 election results, Weingarten, who was speaking at The Atlantic’s “Unfinished Business” LGBT summit, said, “I think that the election results said several things to me.”

Those four things include: