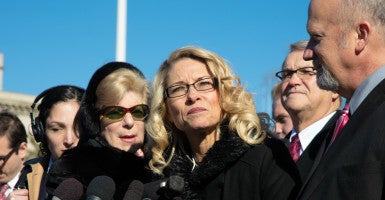 Rebecca Friedrichs and nine other teachers challenged the constitutionality of agency fees they're forced to pay to public-sector unions. The case went before the Supreme Court in January, but following Justice Antonin Scalia's unexpected death, the group representing Friedrichs is calling on the high court to hear her case again. (Photo:Jeff Malet Photography/Newscom)

California teacher Rebecca Friedrichs had her day before the Supreme Court to challenge public-sector unions once. Now, following the unexpected passing of Justice Antonin Scalia, her lawyers are pushing for the elementary school teacher to have her day before the high court again.

Oral arguments in the case Friedrichs v. California Teachers Association took place last month, and because the Supreme Court’s inner workers remain secretive, it’s unknown how far along the justices were in deliberations in the case and whether the high court would come down in favor of Friedrichs and the nine other teachers who joined in her case against the California Teachers Association.

However, the Center for Individual Rights, which along with lead counsel Michael Carvin of Jones Day is representing Friedrichs, is pushing the high court to rehear the case after a new justice is confirmed to the bench.

Friedrichs, an elementary school teacher in Buena Park, Calif., was not available for an interview. But Pell said she, too, believes that the case needs to go before the justices again.

“She is obviously sad about Justice Scalia’s passing and is concerned about the effect that has on the case, so I think she fully recognizes the need to press forward and get a full rehearing in order to get an authoritative decision from the court,” he said.

The California Teachers Association, an affiliate of the National Education Association, did not return The Daily Signal’s request for comment.

Friedrichs and the teachers involved in her case against the California Teachers Association are challenging the “agency fees” that nonunion public employees are required to pay to public-sector unions to fund collective bargaining.

At the heart of the case is the question of whether those agency fees violate public workers’ First Amendment rights to free speech.

Many, including Pell, cast Scalia as the swing vote in Friedrichs’ case, given his past comments on public-sector unions and specifically the plaintiffs’ First Amendment challenge.

However, Scalia’s comments during oral arguments last month convinced court observers that he was ready to rule with Friedrichs, likely rendering a 5-4 decision.

The justice’s unexpected death left many speculating that the eight remaining justices would be split, 4-4.

If the Supreme Court decides not to rehear Friedrichs v. California Teachers Association, a 2014 ruling from the 9th U.S. Circuit Court of Appeals would be left in place.

Friedrichs’ lawyers intend to file a motion for rehearing should that occur.

The appeals court ruled against Friedrichs—which her lawyers asked them to do—citing precedent set by the 1977 case Abood v. Detroit Board of Education.

In Abood, the Supreme Court ruled that public-sector employees can opt out of paying full union dues but have to pay agency fees to fund their “fair share” of collective bargaining agreements.

Because of the precedent set by Abood, Friedrichs’ legal team argued in 2014 that the case should go directly to the high court. Pell said re-arguing the case before the Supreme Court is the only way the case can be adjudicated on its merits.

“Here, there is no real opinion of the appeals court because the appeals court recognized that it was without authority to even entertain the question we were posing—namely, should Abood be overruled? So there’s no court of appeals decision on the merits here. The court of appeals decision was, ‘We can’t decide this. We have to send it to the Supreme Court,’” Pell said.

“So in this case, a tie vote makes even less sense than it would make in any other case,” he continued. “Really, what our clients are asking for is a ruling on the merits, and the Supreme Court is the only court that can provide that ruling.”

The forthcoming decision from the Supreme Court had unions fearing they would be dealt a significant blow, since a ruling against them would effectively make union dues optional for all public employees.

An order from the Supreme Court to rehear the case would leave agency fees in place for at least another year. Should the high court issue a tie vote, Pell said unions should be in favor of re-arguing the case, as a 4-4 split would lead to ongoing doubt for union workers who question whether agency fees violate their First Amendment rights.

“So long as there’s a cloud hanging over these mandatory dues schemes, the unions can’t possibly have the sort of solidarity of unanimity among their members that they claim is necessary to labor peace,” he said. “If a substantial percentage of their covered employees believe that the union’s method of collecting dues is unconstitutional, it does not enhance labor peace, as they claim is so crucial to effectively run a collective bargaining system.”

The Supreme Court could issue an order to rehear the case at any point and doesn’t necessarily need to wait until the end of the term—when it was expected to announce its ruling on the case—to do so.

According to the Center for Individual Rights, a rehearing would occur during the Supreme Court’s next term, which begins in October, with a ruling coming in 2017.

Though the lawyers for both Friedrichs and the California Teachers Union would need to proceed to a second oral argument after a new justice is confirmed by the Senate, Pell said the work is worth the reward.

“The amount of work that it would take to do another oral argument and then re-deliberate this is more than justified by the importance of the case and the significance it has for the 23 states that have laws on the books that we think are denying many individuals the basic right to participate in the political process on the equal terms as anyone else.”