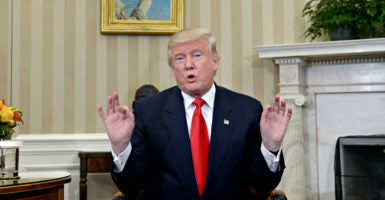 President-elect Donald Trump, here in the Oval Office after his Nov. 10 meeting with President Barack Obama, has ambitious plans for the first 100 days of the Trump administration. (Photo: Olivier Douliery/ABACA /Newscom)

During his campaign, Trump unveiled an ambitious 100-day plan, and with a Republican House and Senate, he’ll be expected to execute much of it.

Trump, who will take office Jan. 20, visited the White House on Thursday morning at the invitation of President Barack Obama—a tradition during presidential transitions. The two met for about 90 minutes, emerging to say they had a productive talk.

Among other things, Trump told reporters, Obama briefed him on “difficulties” the nation faces.

One of Trump’s first orders of business upon assuming the presidency will be nominating a replacement for Supreme Court Justice Antonin Scalia, who died in February. Trump has released two lists of potential nominees with a total of 20 names of conservative jurists, lawmakers, and prominent lawyers who he said he would consider for the high court.

The notion that the first 100 days of a presidency have particular importance originated under President Franklin Roosevelt. After his inauguration in 1933, Roosevelt called Congress into a three-month session. The lawmakers passed 15 major pieces of legislation, such as the Emergency Banking Act, the Federal Deposit Insurance Act, the Tennessee Valley Authority Act, and other notable aspects of the New Deal.

“I will direct the secretary of the Treasury to label China a currency manipulator,” @realDonaldTrump says.

Here’s what to expect early on in Trump’s presidency:

Trump has promised to send several major proposals to Congress as part of his 100-day plan.

During the campaign, he said he would ask Congress to pass his “End Illegal Immigration Act” to pay for construction of a wall along the southern border, with the understanding that Mexico will reimburse the United States for the cost.

President George W. Bush signed the Secure Fence Act of 2006, which authorized construction of a 700-mile fence along the Mexican border. However, Congress hasn’t authorized funding for a wall or fencing.

Besides the bill, Trump said he would halt federal funding to sanctuary cities—the name given to cities, counties, and other jurisdictions that choose not to enforce U.S. immigration laws.

The president-elect also has said he would begin removing more than 2 million criminal illegal immigrants and use “extreme vetting” before admitting refugees or immigrants from terror-wracked regions.

On health care, Trump has vowed to fully repeal the Affordable Care Act, better known as Obamacare, the signature legislative achievement of his predecessor. He said he wants to replace the law with a package that includes offering Health Savings Accounts, allowing the purchase of insurance across state lines, and giving states more autonomy in handling Medicaid funds.

Trump said the plan also would cut red tape at the Food and Drug Administration to allow quicker approval of medicines.

Trump also said he would propose to slash taxes by 35 percent for middle-class families with two or more children, and lower the business rate from 35 percent to 15 percent—which his economic plan asserts would lead to 4 percent annual growth. In Obama’s eight years, the economy never grew by more than 3 percent per year.

Trump also said he would seek a constitutional amendment to put term limits on members of Congress. Previous proposals in Congress would have limited senators to two six-year terms and House members to three two-year terms.

Trump pledged to introduce an “End Offshoring Act” to establish tariffs to discourage companies from laying off workers and relocating in other countries.

Trump’s “American Energy and Infrastructure Act” would establish public-private partnerships to promote $1 trillion in infrastructure spending over the next decade.

Trump has said he would introduce a school choice bill to redirect federal education money to give parents the right to send their children to public, private, charter, magnet, or religious schools of their choice. He said the bill also would end Common Core, the controversial national education standards adopted by many states under federal incentives.

The sweeping victories by Republicans mean the public expects action from the party, Rep. Jim Jordan, R-Ohio, chairman of the House Freedom Caucus, said in an email to The Daily Signal:

Congress must quickly get to work with the new president to implement bold new policies to rein in federal spending, reduce the size of government, and keep the campaign promises made to the everyday Americans we have the privilege to represent. That includes repealing Obamacare, impeaching IRS Commissioner John Koskinen, securing the border, reforming the tax code, and selecting a new Supreme Court justice who is committed to following and defending the Constitution.

His 100-day plan says he will “cancel every unconstitutional executive action, memorandum, and order issued by President Obama.”

On international trade and commerce, Trump plans to renegotiate the North American Free Trade Agreement among the United States, Mexico, and Canada, which Congress approved in 1993. He said he would take other actions, including withdrawing from the Asian trade deal known as the Trans-Pacific Partnership.

“First, I will announce my intention to renegotiate NAFTA or withdraw from the deal under Article 2205,” Trump said in his 100-day plan. “Second, I will announce our withdrawal from the Trans-Pacific Partnership. Third, I will direct the secretary of the Treasury to label China a currency manipulator.”

Trump has called for a hiring freeze on all federal employees as a way to reduce the workforce through attrition. The freeze would exempt members of the military as well as public safety and public health employees.

To scale back federal regulations, Trump has said he would require that for every new regulation it adopts, the government would have to eliminate two existing regulations.

On the ethics front, Trump said he would impose a lifetime ban on former White House staffers becoming lobbyists on behalf of a foreign government.

The Heritage Foundation’s “Blueprint for a New Administration,” issued before the election, called for whoever won the race for president to revoke some of Obama’s executive orders.

Similarly, Trump has said he wants to cancel U.S. payments for the United Nations’ climate programs and use the resources to fix America’s water and environmental infrastructure.

He also planned to lift restrictions on energy production, for what he said would be $50 trillion worth of jobs. This would include allowing more energy-related infrastructure such as the Keystone XL pipeline.

Heritage’s blueprint also calls for the next president to take some executive actions, beginning with one to implement the Mexico City Policy, which prevents taxpayer money from funding international abortions, and end funding to the United Nations Population Fund.

Although Trump wants to repeal the Affordable Care Act, the think tank’s blueprint says the next president should direct the Department of Health and Human Services to end mandated insurance coverage for abortion-inducing drugs, contraception, and therapy or surgery for gender transition.

The next president also should issue an executive order to prevent federal employee unions from automatically collecting union dues from the paychecks of employees, and prohibit use of official work time for collective bargaining activities, the blueprint says.