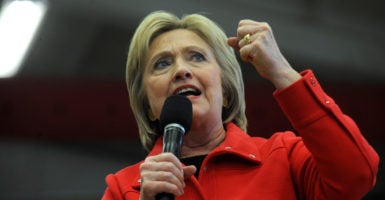 Then-presidential candidate Hillary Clinton greets supporters during a 'get out to caucus' event on Jan. 30, 2016 in Cedar Rapids, Iowa. (Photo: SMG/ZUMA Press/Newscom)

If you’re under the impression that the system exists merely to facilitate your partisan agenda, it’s not surprising that you also believe it’s broken every time things don’t go your way. This is why so many Democrats argue that we should “fix” the Electoral College when they lose a presidential election and “fix” the filibuster when they run the Senate and now “fix” the Supreme Court when they don’t run the Senate.

During the Obama presidency, liberal pundits groused about the supposed crisis posed by a “dysfunctional” Congress. In political media parlance, “dysfunction” can be roughly translated into “Democrats aren’t able to do as they’d like.” Congress, as you know, was only broken when President Obama wasn’t getting his agenda passed, not when his party was imposing a wholly partisan, unprecedented health care regime on all Americans.

In any event, the political establishment spent six years wringing its hands about subsequent GOP electoral success, which was an organic political reaction that strengthened separation of powers and reflected the nation’s ideological divisions. Although you’d never know it listening to political coverage, it meant the system was working just fine.

Yet many of the president’s boosters, including Ezra Klein, then at The Washington Post, began arguing that not only was Congress broken (bad) but it was “fundamentally broken” (really bad!). By 2013, after Republicans had made gains in the Senate, Klein and others were arguing for increasing majoritarianism to “fix” the problem. It was the GOP’s “unprecedented obstructionism” (a euphemism for disagreeing with Obama on policy) that supposedly left them with no other choice.

Now, if the majority of voters had been truly disgusted by “obstructionism,” the GOP would have paid a political price for its actions. The opposite occurred. Perhaps instinctively, voters wanted a more ideologically balanced Washington. So Democrats decided the system was the problem.

What we call “norm breaking” these days was referred to as “reform” during the Obama administration. “Reformers” such as Klein and his allies persuaded Senate Majority Leader Harry Reid, a man who had once argued that weakening the Senate filibuster would “destroy the very checks and balances our Founding Fathers put in place to prevent absolute power by any one branch of government,” to use the “nuclear option” and blow up Senate rules on judicial filibusters so Obama could stack the courts.

“Thanks to all of you who encouraged me to consider filibuster reform,” Reid tweeted in 2013. “It had to be done.”

But then the unanticipated began happening. For one thing, the GOP won the majority, and Senate Majority Leader Mitch McConnell, despite immense pressure, refused to give Obama’s Supreme Court nominee, Merrick Garland, a vote. That was well within his authority as majority leader, his constitutional authority and his ideological imperative to stop Democrats from transforming the Supreme Court into an entity relying on empathy over the Constitution.

This tactic opened a seat for the next president. Then Donald Trump also won. Unexpectedly. And guess what’s broken now.

“The way we choose Supreme Court nominees is broken,” laments Klein, now at Vox. “Here’s how to fix it.”

Klein isn’t alone. Others, such as Harvard’s Ian Samuel, are more straightforwardly partisan, proposing that the next Democratic candidate promise to add six justices to the Supreme Court to neutralize the power of the textualists and create a progressive court. Although the Constitution doesn’t stipulate the number of justices needed and Democrats are free to make such promises if they like, you’d think liberals would have learned their lesson during the Obama years.

The real anxiety driving liberals is the reality of President Trump’s getting another Supreme Court justice, the kind of nominee any conservative president would most likely have picked. This person will presumably help constrain progressive policies because many of those policies rely on coercion and unconstitutional intrusions into personal freedom. Maybe it’s not the system that’s broken but rather the left’s agenda.

The arrogance of the age — maybe every age — is that intellectuals believe, by default, that they’re smarter, more moral and more evolved than those who came before them. We often hear the left griping about the antiquated nature of the Constitution. It was Klein, after all, who once claimed that the Constitution is a confusing document because it is old.

We can disagree about the usefulness of Enlightenment ideas. But when Klein contends that the “chaotic, ugly realpolitik that followed Justice Antonin Scalia’s death” necessitates a “fix,” he is being transparently partisan. Nothing is more chaotic than altering the rules every time you experience a political defeat. And nothing says realpolitik more than attempting to “fix” a system for practical political concerns when your ideological goals fall short.