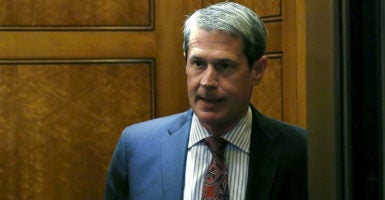 Sen. David Vitter, R-La., exits the Senate floor on May 7, 2015. Vitter, who calls for a constitutional amendment mandating term limits for members of Congress, did not seek a third term this year. (Photo: Gary Cameron/Reuters /Newscom)

Sen. David Vitter, R-La., isn’t just honoring his own pledge to serve no more than 12 years in office. The outgoing lawmaker also is pushing for a constitutional amendment on term limits, to lock other senators into the same time frame.

“We have seen the disastrous effects of what happens when politicians stay in Washington for too long,” Vitter, who ran unsuccessfully last year for Louisiana governor, told The Daily Signal. “Obamacare is a prime example—Congress imposed a hugely complicated, expensive, and unwieldy law on Americans and then illegally exempted themselves from the most expensive aspects.”

“That’s why the importance of implementing term limits, especially in Congress, cannot be understated,” Vitter, the lead sponsor of a resolution calling for the constitutional amendment, added in a written statement.

Vitter’s advocacy began with successfully sponsoring a 1995 measure limiting the terms of Louisiana state lawmakers to no more than 12 years.

“Government constantly needs a new cycle of citizen legislators in order to combat career politicians who put themselves into a separate ruling class,” @DavidVitter says.

“I firmly believe that an effective government constantly needs a new cycle of citizen legislators in order to combat career politicians who put themselves into a separate ruling class,” he said.

So Vitter’s pledge meant he didn’t try to hold on to his Senate seat in a re-election campaign after losing the governorship.

Could the anti-establishment acrimony of the 2016 election cycle be a sign that term limits, a largely dormant issue since the 1990s, will make a comeback?

Yes, in the view of Nick Tomboulides, executive director of U.S. Term Limits, a group established in that decade to advocate term limits for members of Congress and state legislatures.

Last month, Democrat and Republican candidates for the U.S. House and Senate won their primaries after signing the group’s pledge to work for term limits.

In Arizona, Rep. Ann Kirkpatrick, signed the pledge and won her Democratic primary to challenge the 30-year Republican incumbent, Sen. John McCain, in one of the most-watched Senate races of the year. Kirkpatrick first was elected to the House in 2012.

It’s worth noting that McCain, in winning a Republican primary, beat an opponent who signed the pledge.

But, in a Republican primary in Kansas last month, Roger Marshall, a physician who signed the pledge, defeated incumbent Rep. Tim Huelskamp, a conservative who didn’t.

“We are already seeing a lot of anti-incumbency, with about 65 percent of voters saying they want to fire every member of Congress,” Tomboulides told The Daily Signal in a phone interview.

The Vitter amendment, which U.S. Term Limits supports, would limit senators to two six-year terms, or 12 years, and members of the House to three two-year terms, or six years. Tomboulides said:

This allows a senator, in for six years, to get re-elected. The House is more democratic and is closest to the people. The average tenure in the House was four years until the 1900s. The Senate was intended by the Founders to be more removed from the people and independent.

Term limits tends to be viewed as a conservative issue, but Tomboulides argues that the latest national poll on the subject, in 2013, found 75 percent of voters supported term limits for members of the House and Senate. Only nominally more Republicans and independents said so than did Democrats.

U.S. Term Limits contends that the high re-election rate of incumbents is a result of a symbiotic relationship with lobbyists that usually gives incumbents enough of a campaign cash advantage to overwhelm challengers.

However, conservatives have grounds to be wary of congressional term limits, said Mark Meckler, president of Citizens for Self-Governance.

Meckler’s group has pushed for a convention of the states to approve constitutional amendments that include, but aren’t limited to, congressional term limits. The organization also backs a balanced budget amendment and other fiscal measures to reform the federal government.

“In California, the bureaucracy has become all powerful,” Meckler, a co-founder of Tea Party Patriots, said of the state where he lives, adding:

The same could happen with the federal bureaucracy. You have to disempower the bureaucracy too. I would be against term limits without other reforms. Without reducing the scope and power of the federal government, congressional term limits will not be effective as a stand-alone reform.

A study by The Heritage Foundation in 2009 found that states that adopted term limits did not produce less careerism among state legislators, who used their limited time in state capitals to run for higher office.

This, in turn, did not mean less state spending. In fact, on average, states with term limits had 1.9 percent higher expenditures than states without, the Heritage study said.

In the presidential race, only the Libertarian Party ticket of Gary Johnson and Bill Weld has signed the U.S. Term Limits pledge to push the issue if elected.

The major party candidates, Republican Donald Trump and Democrat Hillary Clinton, have not signed on. Trump, however, last month said he would take a “very serious look” at congressional term limits.

“Congress would function more effectively with either term limits or comprehensive campaign finance reform that would rid our political system of special interest money,” O’Rourke, first elected to the House in 2012 and lone Democrat to sign the pledge, told The Daily Signal.

In 2013, O’Rourke introduced unrelated legislation in support of term limits. In a written statement provided to The Daily Signal, the lone Democrat to sign the pledge added:

Such policies would shift members’ focus away from the next election cycle and toward making the tough, principled decisions that will impact our country’s future. There is unquestionable support from the public for term limits. We owe the American people action on this important issue.

Rep. Rod Blum, R-Iowa, co-chairman of the term limits caucus, said the issue should not be allowed to fade. Blum, first elected in 2014, said he supports passage of a constitutional amendment either through Congress or through a convention of the states.

“Since being elected to Congress, I am more supportive than ever of term limits for our politicians,” Blum said, adding:

Serving here should be a short-term sacrifice, not a lifelong career. I will continue working hard alongside like-minded colleagues like Rep. O’Rourke to build support for passing term limits legislation in the House, and encourage Americans who believe in term limits to get involved at a grassroots level to help build momentum as well.

Article V of the Constitution allows two means of amending the founding document. The first is through two-thirds of both houses of Congress approving an amendment. The second is for two-thirds of state legislatures to call a convention to pass an amendment.

In either case, three-fourths of the states have to ratify a constitutional amendment.

In February, the Florida Legislature approved a resolution, pushed by U.S. Term Limits,  to call a convention on a term limits amendment for members of Congress.

Tomboulides said there was a strategic reason to begin in Florida. His group intends to push for more states that already limit the terms of state lawmakers to adopt resolutions calling for a convention to limit the time in office for members of Congress.

“Florida is a very diverse state, and is a swing vote in presidential races,” Tomboulides told The Daily Signal. “The vote in the Legislature was almost unanimous from Republicans and Democrats. That’s an encouraging sign for other states. Congress is not going to clip its own wings.”

That’s still a long way from two-thirds of the states, the number needed to call a convention for the purposes of amending the Constitution.

A constitutional amendment is required because the Supreme Court ruled in 1995, in the case of U.S. Term Limits v. Thornton, that individual states can’t impose term limits on members of Congress.

Before that decision, 23 states had enacted term limits for members of Congress. The ruling didn’t prevent states from enacting laws to impose term limits on state legislators.

Every state except Virginia allows a governor to run for another consecutive four-year term, according to the National Governors Association.

A total of 15 states have enacted term limits for state legislators since the 1990s, according to the National Conference of State Legislatures. They are: Arizona, Arkansas, California, Colorado, Florida, Louisiana, Maine, Michigan, Missouri, Montana, Nebraska, Nevada, Ohio, Oklahoma, and South Dakota.

Six other states passed term limits in that same period but the measures were repealed either by the legislature or the courts: Idaho, Massachusetts, Oregon, Utah, Washington, and Wyoming.