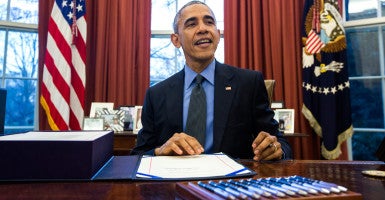 "This legislation would not only repeal parts of the Affordable Care Act, but would reverse the significant progress we have made in improving health care in America," President Obama said. (Photo: Jim Lo Scalzo/EPA/Newscom)

Republican lawmakers hold on to hope of repealing Obamacare and defunding Planned Parenthood, despite President Barack Obama’s veto Friday of a bill to do just that, at least in part.

“Because of the harm this bill would cause to the health and financial security of millions of Americans, it has earned my veto,” Obama said in a prepared statement.

The bill repealing major portions of the Affordable Care Act, or Obamacare, passed the House of Representatives and the Senate. It was sent to the president Thursday.

This legislation would not only repeal parts of the Affordable Care Act, but would reverse the significant progress we have made in improving health care in America. The Affordable Care Act includes a set of fairer rules and stronger consumer protections that have made health care coverage more affordable, more attainable, and more patient centered. And it is working.

House Speaker Paul Ryan insisted it is “just a matter of time” before lawmakers repeal and replace Obamacare.

“The idea that Obamacare is the law of the land for good is a myth. This law will collapse under its own weight, or it will be repealed,” Ryan, R-Wis., said in a statement Friday. Republicans used a process called budget reconciliation to get the bill, called the Restoring Americans’ Healthcare Freedom Reconciliation Act, to Obama’s desk without a filibuster by Senate Democrats.

It included a one-year halt to taxpayer funding of Planned Parenthood, the nation’s largest abortion provider, in the wake of a scandal over the sale of the body parts of aborted babies.

“It’s no surprise that someone named Obama vetoed a bill repealing Obamacare,” Ryan said. “But we will hold a vote to override this veto, taking this process all the way to the end under the Constitution.”

A two-thirds vote by both the House and Senate is needed to override a presidential veto, and analysts consider that a high bar, since Democrats are united behind the president. Republicans’ goal was to put a repeal bill on his desk anyway, as they had promised voters. “The president’s decision to keep #Obamacare in place is bad for America,” House Majority Leader Kevin McCarthy tweeted. “The House will vote to override his veto Jan. 26.”

Sen. Bernie Sanders, I-Vt., tweeted: “Instead of throwing 17 million Americans off of health insurance, we should be expanding on the Affordable Care Act.”

“It is now our task to craft a new solution that will lower costs and improve access to care for all,” Republican Study Committee Chairman Bill Flores, R-Texas, said in a prepared statement. “We can only do that by restoring power to individuals and families—not federal bureaucrats—that should be in charge of their own health care decisions.”

Other GOP lawmakers also commented on the president’s veto.

“I’m disappointed that the president continues to ignore families and small businesses who have been hurt by the painful effects of Obamacare, from rising costs, to losing access to doctors, to hampering businesses’ abilities to hire new employees,” Sen. Joni Ernst, R-Iowa, said.

“With his veto, President Obama has singlehandedly denied the American people the relief they seek from a law that is driving up the cost of health care, while driving down the quality,” Rep. Tom Price, R-Ga., said.

“While no one will be surprised by the president’s decision, many Americans will continue to be harmed by it.”

Regardless of @POTUS' veto, #Obamacare is still a disaster, and will be repealed. We will have an override vote. #DefundPlannedParenthood

“All is not lost,” Rep.Vicky Hartzler, R-Mo., said. “We have shown there is a clear path to repealing this broken law. There is a path to an affordable health care system the people want and deserve. We will continue to work towards patient-centered reform and I am hopeful we can send a repeal bill next year to a president who respects the will of the people and will sign this into law.”

Shame on POTUS for ignoring Americans & vetoing #ObamaCareRepeal bill. Americans deserve to have control over their healthcare, not fed gov.

“The silver lining here is that we now have a path forward to get rid of Obamacare and defund Planned Parenthood once a different president is in the White House,” Rep. Bradley Byrne, R-Ala., said. “The American people have now seen the path toward two very different Americas, and voters will have a clear choice in November.”

Our Promise: Repeal Obamacare. Obama's (broken) promise: If you like your health care, you can keep it. We kept our promise. #OnHisDesk