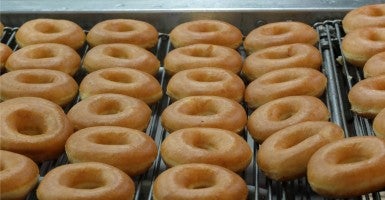 The Food and Drug Administration estimates its newly announced ban on artificial trans fats could hit food manufacturers with $12-to-$14 billion in losses.

Companies using trans fats in their products—foods such as french fries and doughnuts—will need to research and test new ingredients to maintain shelf life and flavor, relabeling and repackaging products to adhere to the new standards. The shift could cost up to $200,000 per product, according to USA Today.

“For some companies, it may not even be feasible to try and develop an alternative,” Daren Bakst, a research fellow in agricultural policy for The Heritage Foundation said. “Products that exist today may not exist in the near future due to this de facto ban.”

He predicts consumers will ultimately bear the cost of the shift.

The FDA announced the ban Tuesday, citing a threat to public health. All food manufacturers will have to phase artificial trans fats out of their products by 2018, a move they estimate could prevent 20,000 heart attacks and 7,000 deaths from heart disease each year.

But consumers have already drastically reduced trans fat consumption over the past decade.

According to the FDA, “consumption of trans fat from products containing partially hydrogenated oils has declined dramatically from 4.6 grams per day in 2003 to about 1 gram per day in 2012.” The decline marks a 78 percent drop.

“The FDA’s actions are about government arrogance, and its misguided belief that agency bureaucrats know what people should and shouldn’t eat,” Bakst said. “People can make voluntary dietary choices on their own. Those choices, even if unwise in the eyes of some, should be respected.”

Prior to the FDA’s announcement, products containing less than 0.5 grams of trans fats per serving could remain on shelves without including the ingredient on the label. Under new law, manufacturers cannot use the ingredient without explicit permission from regulators.

Bakst said the issue boils down to the government respecting individual freedom.

“The dose makes the poison,” Bakst said. “Nobody is going to die because they ate a bag of microwave popcorn or had a cupcake with frosting.”