Euthanasia Deaths Hit Record High in Belgium. Why That Matters for the US. 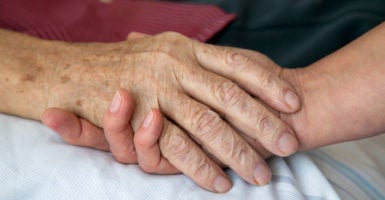 As euthanasia cases reach a record high in Belgium, some warn of the growing trend toward physician-assisted suicide in the U.S. (Photo: Caro/Rupert Oberhäuser /Newscom)

A record number of people died last year under Belgium’s 13-year-old euthanasia law, according to an oversight commission.

Since the law took effect, a total of 12,762 people officially have been euthanized, the report by the Belgium Euthanasia Control Commission says.

Belgium’s law, the most liberal in the world, makes euthanasia available to anyone who is in “constant and unbearable physical or mental suffering that cannot be alleviated.”

Critics argue the definition of “unbearable” is deeply subjective and dependent on a patient’s willingness to take pain medication, which is not a requirement under the law.

Euthanasia, defined by Merriam-Webster as “the act or practice of killing someone who is very sick or injured in order to prevent any more suffering,” is legal in both Belgium and the Netherlands. The countries allow euthanasia in nonterminal illnesses and for psychological conditions such as depression.

In 2014, Belgium lifted age restrictions for those under 18 and in September the first child died by euthanasia. The identity and age of the child are unknown.

In the Netherlands, euthanasia is legal for minors over 12 years old.

In both countries, lawmakers seek to expand the euthanasia laws further. The Christian nonprofit legal group ADF International, which is closely tracking developments in European euthanasia laws, says lawmakers propose to “allow euthanasia for people who are simply ‘tired of life’ (Netherlands); perform euthanasia on patients who are unable to express their will (Belgium); [and] oblige doctors refer patients to other doctors where they do not wish to perform euthanasia (Belgium).”

Sophia Kuby, director of European Union advocacy at ADF International, said developments in Europe should serve as a warning sign for the U.S., where assisted suicide is a growing trend.

“The question is, do we enter a slippery slope if we legalize this or not?” Kuby said, adding: “My answer, from the experience I see here in Belgium and in the Netherlands, is clearly yes.”

In the U.S., physician-assisted suicide, often called “death with dignity” by advocates, is legal in California, Oregon, Vermont, and Washington state.

The D.C. City Council voted Tuesday to legalize the practice in the nation’s capital, although the measure must win final approval by lawmakers and be signed by Mayor Muriel Bowser. Voters in Colorado will decide a Nov. 8 ballot question on legalizing assisted suicide.

Assisted suicide laws vary from state to state, but generally require patients to be terminally ill with a prognosis of fewer than six months to live. The terminally ill person is required to self-administer the life-ending drugs.

Supporters of assisted suicide laws argue they offer an alternative to hospice and palliative care to relieve pain and suffering, and allow the terminally ill to die in peace with loved ones near. They say that assisted suicide differs from euthanasia, and that it’s unfair to compare the two.

“Comparing medical aid in dying to euthanasia is like comparing apples and orangutans,” said Sean Crowley, a spokesman for Compassion & Choices, which advocates “death with dignity” laws in the U.S. Crowley added:

Compassion & Choices advocates for medical aid in dying because, unlike euthanasia, only the terminally ill person controls the process from beginning to end, including whether to self-administer the medication. This self-administration requirement is important because more than one-third of Oregonians who obtain aid-in-dying medication do not take it.

Kuby, who lives in Brussels, Belgium, suggested the opposite.

“Why would we not look to how things develop in those countries where they have more experience with it … where they have a longer history, at least more than a decade with the euthanasia law?”

She has learned two things in watching euthanasia laws in Belgium and the Netherlands, Kuby said.

“Of course it’s a safeguard if you [limit the law to] terminally ill, six months to live. But even if we speak of physical illness, who can really say that you have six months left?” she said, adding:

That’s the first indicator that we get into a very vague feud where it’s just impossible because of the nature of things to make clear predictions. The second thing is, if you say it’s OK to take your life and it’s OK for a doctor to assist you for reason X, for reason Y, for reason Z, in this case terminally ill, not longer than six months of life expectancy, then why not someone who has nine months of life expectancy, or a year?

Crowley, who supports assisted suicide but not euthanasia, argued that “in the vast majority of situations, a six-month prognosis is sufficient time to request and receive medication for aid in dying.”

Crowley added: “The basic requirements for U.S. laws authorizing medical aid in dying—self-administration, terminal illness, and mentally capable adult—have remained the same since Oregon became the first state to authorize this end-of-life option more than 20 years ago in 1994. There is no rational reason to believe the U.S. model will change just because other countries with vastly different political models and values have done so.”

As the laws in Belgium and the Netherlands continue to expand, Kuby said, more “extreme” cases have come to light, with some making national headlines.

In 2012, 45-year-old deaf twin brothers chose to be euthanized because they received a prognosis that they would soon go blind.

According to reports, the doctor who oversaw the euthanasia procedure described the twins as “very happy.”

In 2013, a 44-year-old transgender Belgian who was born female but identified as a male was euthanized after a sex reassignment surgery went wrong.

“I was ready to celebrate my new birth,” the Belgian told Het Laatste Nieuws hours before being euthanized. “But when I looked in the mirror, I was disgusted with myself. My new breasts did not match my expectations and my new penis had symptoms of rejection. I do not want to be … a monster. ”

The reason for the euthanasia was listed as “unbearable psychological suffering.”

Kuby, fearful that the euthanasia laws in Belgium and the Netherlands will continue to expand, predicts the trend toward allowing people to choose death will gain more traction, both in the U.S and abroad.

“We see that it doesn’t stop,” she said, warning against assisted suicide laws in the U.S. “Even with a very, very liberal law, on a legislative level, it goes further and further.”

This report has been modified to reflect that state laws on physician-assisted suicide require the terminally ill person to self-administer life-ending drugs. A physician or health care professional, contrary to the original wording, is not allowed to administer the drugs.