DC City Council Votes to Allow Physician-Assisted Suicide. That’ll Change Us All, for the Worse. 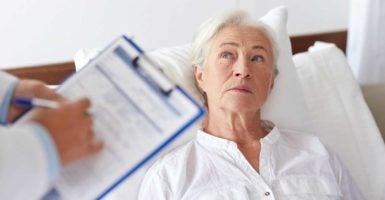 Earlier today, the D.C. City Council voted to allow physician-assisted suicide. But the debate isn’t over. The Washington Post reports that “the council must still hold a final vote on the bill, possibly as early as Nov. 15,” and that the mayor, Muriel Bowser, must decide if she’ll sign or veto the bill.

The mayor should veto the bill. Physician-assisted suicide will change us all, for the worse—as I explain in a Heritage Foundation report, “Always Care, Never Kill: How Physician-Assisted Suicide Endangers the Weak, Corrupts Medicine, Compromises the Family, and Violates Human Dignity and Equality.”

But no man is an island. Allowing doctors to prescribe deadly drugs to assist in the suicides of their patients is not simply a one-off interaction between two consenting adults. Changing the laws that govern how doctors operate will change the entire ecosystem of medicine. It’ll change how doctors relate to their patients and how much patients can trust their doctors.

Ultimately, it will change how society views the weak and the marginalized and affect our family relationships—how we view our elders and our duties toward them.

No one is perpetually self-sufficient. We enter life entirely dependent on our parents, and many of us exit life dependent on our children. Along the way, through life’s ups and downs, we’ll rely on neighbors, friends, and family. A healthy society will help shoulder the burdens of life, recognize everyone’s intrinsic worth and dignity, and thus respect human equality.

But assisted suicide denies this. It says that some lives are unworthy of legal protection. That if you’re sick enough or disabled enough, you’re better off dead—and that doctors can give deadly drugs to you, but not to people with allegedly greater social value.

Diane Coleman of the Center for Disability Rights puts it like this:

Assisted suicide sets up a double standard for how health care providers, government authorities, and others respond to an individual’s stated wish to die. Some people get suicide prevention while others get suicide assistance, and the difference between the two groups is the health status of the individual.

Once you start down the road of making some lives eligible for assisted suicide, the lethal logic is clear. Baroness Mary Warnock, a leading ethicist in the United Kingdom, has argued, “If you’re demented, you’re wasting people’s lives—your family’s lives—and you’re wasting the resources of the National Health Service.” Such people, she suggests, have a “duty to die.”

Dr. Paul McHugh of Johns Hopkins Hospital explains what happens when this boundary is crossed:

Once doctors agree to assist a person’s suicide, ultimately they find it difficult to reject anyone who seeks their services. The killing of patients by doctors spreads to encompass many treatable but mentally troubled individuals, as seen today in the Netherlands, Belgium, and Switzerland.

D.C.’s proposed assisted suicide law is ripe for abuse. As I explain in the Heritage report, a family member or friend who might benefit financially from the death of a patient may act as a witness that the patient is voluntarily requesting the lethal prescription, and doctors who support the ideology of death can judge patients to be “qualified” under the law—even if they’ve never before met the patient (or the patient’s family). Finally, it sets no safeguards whatsoever to ensure voluntariness or competence—or to guard against coercion—at the time the deadly drug is administered.

The lack of legal protections at the time the lethal choice is made has led Judge Neil Gorsuch to ask: “How does it serve the putative goal of autonomous patient decision making to set up a regime that allows people to commit suicide without considering whether they are, in fact, acting freely, competently, and autonomously at the time of suicide?”

Instead of changing our entire ecosystem of medicine and family relations, we should respond to suffering with true compassion and solidarity. People seeking assisted suicide typically suffer from depression or other mental illnesses, as well as simply from loneliness. Rather than help them kill themselves, we should offer them appropriate psychological and  psychiatric care as well as human presence.

For those in physical pain, pain management and other palliative medicine can manage their symptoms effectively. For those for whom death is imminent, hospice care and fellowship can accompany them in their last days. Anything less falls short of what human dignity requires. The real challenge facing society isn’t to legalize assisted suicide, but to make quality end-of-life care available to all.

Doctors should help their patients to die a dignified death of natural causes, not assist in killing. They are to eliminate illness and disease but never eliminate their patients. Not every medical means must be used. Patients can refuse or doctors can withhold particular treatments that are useless or causing more harm than good. But in deciding that a treatment is useless, we must not decide that a patient is worthless. Physicians are always to care, never to kill.

This article was originally posted in The Washington Times