Why Debt Limit Is Indispensable Tool to Ensure Limited Government 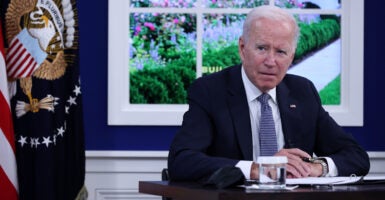 President Joe Biden—seen here hosting a meeting Oct. 6 with corporate chief executives and members of his Cabinet to discuss the looming federal debt limit—has otherwise tried to keep the debt limit out of the public eye. (Photo: Chip Somodevilla/Getty Images)

While the debt limit has been removed from most people’s focus, it’s one of the best tools to ensure a limited government that doesn’t burden Americans and sap our economic vitality.

When the debt limit was suspended from July 2019 through July 2021, few could have known that more than $5 trillion of new coronavirus pandemic-era debt would sneak in during the suspension. Yet, we knew the American people were being exposed potentially to an unlimited increase in the debt.

This two-year absence of the debt limit has enabled a tremendous expansion of the federal government and likely added significantly to current inflationary pressures. The ramifications of another quick and reckless abuse of the debt limit could have grave consequences.

Lurking in the shadows of President Joe Biden’s so-called Build Back Better bill debate is the fast approaching debt limit. In fact, we are already there. The Treasury Department is again quietly employing “extraordinary measures” to finance federal deficits.

With Biden having signed a $1.2 trillion spending bill into law, Congress will likely be expected to vote again on the debt limit before the end of the year. Treasury thinks extraordinary measures are likely to be exhausted after Dec. 15.

Without a dramatic increase in the debt limit, plans for radically expanding the size and scope of the federal government cannot come into effect. It’s vital that we remember the power of the debt limit to prevent these abuses and to defend the rights of all Americans to the fruits of our labors.

Build Back Better would, if realistically implemented, call for perhaps $4.6 trillion in new spending and tax credits over a decade—much of which would be wealth redistribution from hardworking Americans to politically connected corporations and individuals.

Biden’s plan would “build back” for a few, and with someone else’s money—specifically, your money. Pulling this much money out of the economy and redistributing it in an arbitrary and inefficient manner will only exacerbate the current supply chain crisis and inflationary trend.

All federal government spending is, unavoidably, at the expense of the American people. That’s why our Constitution narrowly defines federal taxing power and why we have the debt limit among many other fiscal controls and rules.

Make no mistake, all government spending is a form of wealth redistribution—first, from all Americans to the government, and then, through the projects and favoritism of the government, to a handful of people and entities.

Regardless of what politicians and bureaucrats do with the money afterward, all government funding is first acquired by destructively pulling it out of the economy.

Biden and the left have tried to keep the debt limit out of the spotlight. The left routinely paints the debt limit as an arcane obstacle to its plans—as though it’s merely some vestige of a bygone era.

You may even have read about some seemingly ludicrous ideas, such as minting a trillion-dollar coin, to avoid the debt limit, effectively doubling down on devaluing our currency.

However, all these distractions intentionally obscure the true purpose of the debt limit. It’s a promise to the American people that the government will not endlessly take more of what they earn and produce.

The debt limit isn’t an external limitation, such as the credit limit a bank puts on your credit card. The debt limit is one of the tools the American people have to help safeguard us from an abusively large federal government.

Federal deficits are typically financed by drawing capital out of the private sector, leading to reduced investment in economic growth and opportunity, thereby creating burdens on all Americans.

While Biden might point to a list of goodies in the Build Back Better bill, it comes with destruction of broader economic opportunity.

There’s another way to finance federal debt; namely, printing money. As ludicrous as that may sound, roughly 55% of new federal debt since the start of the pandemic has been financed that way.

Pumping new money into the economy, the Federal Reserve has purchased roughly $3 trillion of new federal debt just to try to keep up with the federal government’s pandemic bar tab—which has, so far, added $5.5 trillion to the debt since the start of the pandemic. That’s roughly $43,000 per household.

We are now in uncharted territory. The Fed has increased the money supply by increasing its asset holdings by more than $7.6 trillion in just 13 years. It’s unclear how much of the recent inflationary trend comes from this large increase in the money supply or the rampant federal deficit spending it finances.

That’s exactly what the debt limit and other fiscally responsible rules can prevent. Without these limits, the federal government could easily hold a blank check with your name on it.

That’s the very definition of an unlimited government.

Such a powerful and ever-expanding government stifles more than our economic prosperity. It represents an assault on the basic freedoms that lay at the foundation of our society.

As the end of the year fast approaches, don’t ignore the next push to simply wave off the debt limit. Though the debt limit may seem like congressional fine print, it’s the fine print Biden and the central planners don’t want you to read.

We must remember that the debt limit is one of our indispensable tools to ensure a rights-respecting and properly limited government.