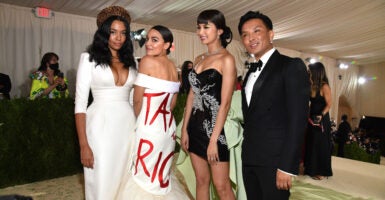 The most recent version of the House’s reconciliation package includes a provision that would provide over $68,000 for each of the top 0.35% of tax filers in the U.S. and $45 for the bottom 81%.

This provision is an increase in the amount of state and local taxes that individuals can deduct on their federal income tax returns, from the current $10,000 cap to $80,000.

That’s hardly in line with the social infrastructure package’s purported theme of taxing the rich to help struggling families.

Yet, it’s become increasingly clear that liberal politicians are willing to trade their stated values for political support—even if it’s contrary their alleged goals.

The Joint Committee on Taxation estimated that federal revenues would fall by $222 billion over the next five years under the House’s proposal to allow taxpayers to deduct up to $72,500 of state and local taxes from their income for federal tax purposes. Although the newer version that raises the deduction to $80,000 hasn’t yet been scored by Joint Committee on Taxation, a back-of-the-envelope estimate is that it will increase the original cost estimates by about 5% in the initial years.

(Note that the Joint Committee on Taxation scores the provision as a small net revenue-raiser over 10 years, but that is due to budget gimmicks. The current $10,000 cap on the SALT deduction is set to expire in 2025, and Democrats’ proposal effectively adds a new $80,000 cap from 2026-2030 and then reduces the cap to $10,000 in 2031 to give the appearance that the proposal “raises” money when in reality it gives hundreds of billions away to the highest-income taxpayers.)

According to the Tax Foundation, 80% of that windfall would go to taxpayers making over $200,000 per year (that was based on the $72,500 SALT deduction—an even greater share of an $80,000 deduction would go to the highest-income taxpayers).

Less than 2.5% of the state and local tax provision would flow to the 81% of households that make under $100,000. On average, those households would receive $45 over the next five years, but the overwhelming majority would receive nothing.

Although not quantifiable, the real winners from allowing up to $80,000 of state and local taxes to be deducted are the politicians in liberal states that would even impose such high taxes to begin with.

What the state and local tax deduction actually does is allow liberal state and local lawmakers who prefer bigger governments to raise taxes and shift up to a third of the cost onto federal taxpayers in other states.

It’s not surprising to see which lawmakers are lobbying hardest for this provision when you consider the average state and local income and property taxes imposed on millionaires across the states are two to nine times as high in New York, New Jersey, and California as in Texas, Florida, Arizona, and West Virginia.

Average state and local income and property taxes reported on the returns of individuals with over $1,000,000 of income (rounded to the nearest hundred):