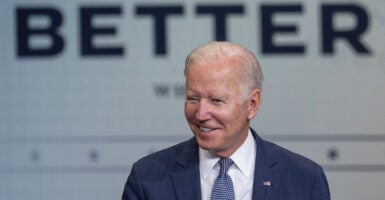 President Joe Biden speaks at the New Jersey Transit Meadowlands maintenance complex, promoting his so-called Build Back Better bill in Kearny, New Jersey, Oct. 25. Critics say the measure would be better only for the well-connected and for federal bureaucrats. (Photo: Andrew Caballero-Reynolds/AFP/Getty Images)

President Joe Biden wants you to view his $3.5 trillion tax-and-spend Christmas wish list as an “investment.”

However, the specific details of this 2,465-page manifesto tell a very different story. It’s an old story, one where your interests and hard work are subverted for the benefit of a well-connected few.

Politicians often discuss the economy as a singular entity that can easily be controlled by some legislative act. It isn’t, however, anywhere near that simple. The economy represents the summation of the work of all Americans to contribute to their communities and build a foundation for a more prosperous future.

Every good and service we produce that enriches our lives requires innovation and hard work to invent, design, produce, and ultimately make available. That’s a delicate process that requires a society where people are free to pursue their passions and reap the benefits of their hard work and successful innovation.

Instead, Biden’s plan offers dramatic tax increases, increasing regulatory burdens, distortionary benefits for the well-connected, and a bloated bureaucracy designed only to micromanage and suppress freedom.

The only investment made by Biden’s so-called Build Back Better bill is in the tools of tyranny and central planners.

The following are just 10 of the egregious provisions of the bill that would undermine the work of innovators and entrepreneurs and that would stifle economic opportunities for all Americans.

1) Your Tax Dollars for IRS

The bill would dramatically expand funding to the IRS for so-called enforcement activities. Section 138401 of the bill would provide $78.9 billion to hire an army of new IRS agents over the next 10 years. Evenly spent across the coming decade, that would amount to more than a 64% increase in IRS funding.

While genuine tax code enforcement is important, that’s plainly not what this is about. The nebulous tax gap Biden has talked about is a euphemistic way of describing when the IRS disagrees with how a business runs its operations.

The section would effectively take an additional $640 per American household to give to the IRS so it can nitpick every deduction taken by every business and micromanage their operations. That won’t make the tax code fairer. It will only stunt real economic development and stifle job creation.

The bill doesn’t just stop at bolstering the IRS. Sections 21001-21003 would direct $2.6 billion of taxpayer funds to the Department of Labor to dramatically expand its army of bureaucrats to harass businesses more and more.

That could include using those funds to enforce a vaccine mandate that Congress never gave the Occupational Safety and Health Administration the authority to pursue.

These provisions go beyond law enforcement and would subject every business decision to the scrutiny of bureaucrats that, with a single unwarranted legal action, could derail any business endeavor.

The bill would increase the Small Business Administration’s bureaucracy by $3 billion. That represents funds taken from taxpayers and used to distort and micromanage investment in small and new businesses.

That won’t support small business development. Small Business Administration operations and regulations make it harder for investment in small business to occur outside of the highly regulated and distorted avenues that are controlled by the agency.

Section 138514 of the bill would create an above-the-line tax deduction for union dues, granting a taxpayer-funded subsidy to unions. That would effectively give union income the kind of tax treatment reserved for charities.

5) Making Well-Connected Even More So

In additional to the aforementioned IRS provision, the bill would give another $3.8 billion to the IRS to administer subsidies through the tax code.

Section 136801 would, at taxpayer expense, expand the IRS’ ability to aid those well-connected interests allotted subsidies in the bill. The subsidies help certain interests over others; for example, green energy subsidies that cherry-pick certain companies and certain, specific types of energy production.

Government bureaucrats are certainly not the best engineers and businessmen in the country. Their cherry-picking doesn’t produce more beneficial economic activity. They simply—and haphazardly—redirect funds from taxed entities to subsidized entities, stunting productive innovation along the way.

Sections 12008 and 12009 direct $3.5 billion toward federal central planners to cherry-pick winning and losing businesses in rural America. They also use $545 million in taxpayer funds just to administer this program.

These so-called economic development grants would amount to little more than a slush fund to ensure jobs for bureaucrats and that taxpayer funds would be given to well-connected business interests at the expense of everyone else.

The bill would also create a $5 billion program to allow bureaucrats to subsidize the business ventures and economic activities they deem worthy of investment. While Section 90001 styles this as a “regional innovation” program, it would add yet another slush fund under government control.

The government cannot magically produce innovation or inventions. Programs such as this interfere with the organic process that free people engage in to produce the real innovation that lifts the economic fortunes of all.

Sections 110018 and 110019 would commit $4 billion in taxpayer funding to so-called economic growth clusters. As with the above sections, that would just create one more bureaucratically directed slush fund.

The burden of these types of programs falls on all Americans through lost prosperity.

As distortionary and burdensome as federal cherry-picked business subsidies are, adding demographic discrimination to them only compounds their harm.

Any entity receiving those funds would be required to use Davis-Bacon union-determined prevailing-wage levels. That would boost unions with taxpayer funds.

Furthermore, this program would take billions of dollars from hardworking Americans and productive U.S. businesses to be used by state and local governments. This is a clear-cut case of funds being directed away from private free market investment and toward “investment” run and directed by the government.

That’s not a path toward prosperity. It’s a giant step in the direction of central planning, government malinvestment, and stunted economic growth and opportunity.