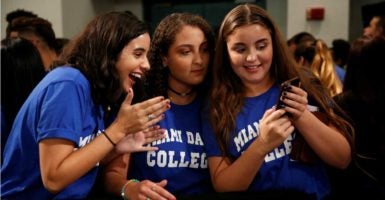 Adults between the ages of 18 and 34 have been significantly underrepresented in Obamacare federal enrollment numbers in previous years. (Photo: Kevin Lamarque /Reuters/Newscom)

The Obama administration is struggling to sell the president’s signature health care reform with millennials and is now reaching out to the youngest adult generation to coax them into the program.

However, some experts say the cost of enrollment is prohibitive and puts a larger burden on younger enrollees.

The administration’s outreach, which includes making HealthCare.gov more mobile friendly and the hashtag #HealthyAdulting, comes in the wake of criticism that younger Americans are being overcharged or priced out of the marketplace altogether by the Obamacare mandate.

“Young, healthy people tend to have lower incomes and would rather spend their money on something else.” —Ed Haislmaier

Adults between the ages of 18 and 34 have been significantly underrepresented in federal enrollment numbers in previous years, accounting for just 24 percent of sign ups in 2014. Yet, a 2014 Washington Post report said the Kaiser Family Foundation estimated that young adults represented 40 percent of the uninsured. Young people are also the age group least likely to be insured.

However, some policy analysts have expressed concern that this raises the premiums of young Americans. According to an analysis by Heritage Foundation researchers, this could drive many out of the market and raise costs for those who remain—including the elderly. The analysis suggested that young enrollees are paying 44 percent more than they otherwise would as a result of the Obamacare regulations.

“Without changing a lot of the basic design of the [Affordable Care Act], there’s no way to really bring down the cost … for young, healthy people,” Ed Haislmaier, a senior research fellow in health policy studies at The Heritage Foundation, told The Daily Signal. “Young, healthy people tend to have lower incomes and would rather spend their money on something else, so it’s difficult to give them a value proposition where they would instead spend money on [health insurance].”

For the initiative, the administration has partnered with video game streaming service Twitch, which will assist in promoting the new mobile site.

The redesigned site will facilitate navigation from mobile platforms, improving users’ ability to easily compare insurance plans. Previously, the website had been described as “cumbersome and difficult to access,” as reported by the Washington Examiner.

Half of Americans ages 18-29 use their cell phones as their primary means to access the internet, according to a 2013 Pew Research Center survey.

The new website is part of a broader outreach by the administration to encourage young Americans to enroll in health insurance programs through government exchanges. Other efforts include Twitch streams encouraging young people to purchase health insurance, and a “Healthy Campus Challenge” initiative, a program that seeks to “engage college and university campuses in enrollment efforts nationwide.”