Fact-Checking 7 Claims in the President’s Speech on Obamacare 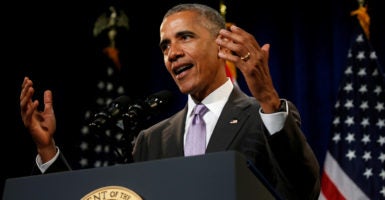 In a speech before Miami Dade College students in Miami, Florida, on Thursday, President Barack Obama spoke about some of the successes of the Affordable Care Act, as well as what he would like to see for the future of his signature health care law.

The president’s address came just weeks before the 2017 open enrollment period, which starts Nov. 1, and at a time when much of the news surrounding the health care law has focused on increasing premiums and decreasing options for consumers buying coverage on Obamacare’s exchanges.

During his speech, the president touted the uninsured rate, which is at its lowest in history, but also conceded that improvements can be made to the law.

The president called for the creation of a public option, or government-run plan that competes with private insurers, which he mentioned in the Journal of the American Medical Association in June.

“The Affordable Care Act has done what it was designed to do,” Obama said. “It gave us affordable health care.”

In the years since Obamacare’s implementation, GOP lawmakers have voted to repeal the health care law more than 60 times. Obama, referencing those attempts, called on Republicans to abandon those efforts and instead work with the next president to fix the law.

“Repeal is not the answer,” he said.

While the president outlined many of Obamacare’s accomplishments, The Daily Signal provided more context for some of Obama’s claims about the health care law.

1.) “Because of this law, because of Obamacare, another 20 million Americans know the financial security of health insurance.”

Though the uninsured rate has reached a historic low and 20 million Americans now have health insurance, the majority of those who enrolled in coverage under Obamacare qualified for Medicaid. The Affordable Care Act loosened the guidelines for Medicaid eligibility, and since the law was passed in 2009, 31 states and the District of Columbia have expanded the program.

In 2014, for example, 9.25 million consumers enrolled in coverage on the federal and state-run exchanges. However, 97 percent of those new enrollees, or 8.99 million people, enrolled in Medicaid.

Under Medicaid expansion, people making up to 138 percent of the federal poverty line, or about $16,390 for an individual, qualified for Medicaid.

2.) “States like Louisiana that just expanded Medicaid—you had a Republican governor replaced by a Democratic governor. He said, ‘I want that money.’ [He] expanded Medicaid and found not only does it insure more people, but it’s actually saved the state big money and makes people less dependent on expensive emergency room care.”

Despite the president’s claim, recent findings from a study published in the New England Journal of Medicine found that expanding Medicaid won’t stop patients from using emergency rooms for primary care.

The study, published Wednesday, examined patients in Oregon who were enrolled in Medicaid in 2008. Oregon expanded its Medicaid system that year for enrollees selected through a lottery system.

According to the study, visits to the emergency room remained high two years after those selected for the lottery were enrolled in Medicaid.

The study was first published in 2014, and that year, researchers found that those who enrolled in Medicaid through the state’s lottery increased emergency room visits by 40 percent over the first 15 months of enrollment.

With two more years of data between the 2014 and 2016 studies, researchers said Wednesday there was no sign of emergency room use dropping.

3.) “For most Americans, the Affordable Care Act, [Obamacare], has not affected your coverage except to make it stronger.”

Though the majority of Americans receive their health insurance coverage through their employers, consumers purchasing plans both on and off the exchange have seen their narrower networks, canceled policies, and increased deductibles and premiums.

Insurance companies have pointed to enrollees who are sicker and more expensive as one of the primary reasons for increased premiums. Additionally, health policy experts have said that insurers have been forced to narrow networks as a way to control premium increases.

The federal government covered the cost of Medicaid expansion to states for its first three years, 2014 to 2017. During his speech, the president said the health care law provided states with an incentive to expand Medicaid at no cost to its taxpayers.

However, an August report from the Centers for Medicare and Medicaid Services Office of the Actuary found that the cost of Medicaid expansion for 2015 was $6,366 per person—49 percent higher than past estimates.

In its report, the Centers for Medicare and Medicaid Services said it expected the costs of expansion per person to decrease, but instead, costs increased.

Additionally, a 2015 report from the Foundation for Government Accountability, a Florida-based think tank, found that Medicaid expansion in Ohio ran $1.5 billion over budget during the program’s first 18 months. Budget officials in Kentucky estimated Medicaid expansion there would cost $1.8 billion more than expected during 2014 and 2015.

5.) “Most people today can find a plan for less than $75 a month at the HealthCare.gov marketplace when you include the tax credits that the government is giving you.”

Earlier this month, Department of Health and Human Services Secretary Sylvia Mathews Burwell said that consumers who purchase plans on the exchange and receive a subsidy may see monthly premiums of less than $75. The president echoed Burwell’s statement Thursday.

However, of the 17.3 million people who purchase plans sold in the individual market in 2015, 7.3 million received subsidies that lowered the cost of their health insurance. Another 10 million consumers did not qualify for financial assistance.

Those consumers, experts say, are going to be hit the hardest by premium increases. In Missouri, for example, one Kansas City resident will see his monthly premiums rise to $716 each month.

Additionally, an analysis from Standard & Poor’s found that enrollment in Obamacare’s exchanges is likely to decrease next year as consumers who don’t qualify for subsidies leave them. Roughly 85 percent of consumers on the exchange are eligible for financial assistance, but the rest won’t be shielded from premium increases.

6.) “The second issue has to do with the marketplaces. Although the marketplaces are working well in most of the states, there are some states where there’s still not enough competition between insurers.”

After Obamacare was passed in 2009, states were encouraged to build their own exchanges. Those that did not would be permitted to use the federal exchange, HealthCare.gov.

As of 2016, 13 states had their own marketplaces, while another 27 used the federal exchange. Another seven had state-partnership marketplaces, and four had federally supported marketplaces, according to the Kaiser Family Foundation.

Earlier this month, the federal government approved Kentucky’s request to switch from its own exchange, Kynect, to the federal exchange for the 2017 open enrollment period.

Technical issues haven’t been the only problems with the exchanges, as insurers large and small have decided to pull out of them after losing money.

In five states, consumers who purchase coverage on the exchanges will have just one insurer to choose from. And in Tennessee, Insurance Commissioner Julie Mix McPeak warned in August, its exchange was “very near collapse.”

McPeak said she had to approve significant rate increases in the state in order to ensure consumers in Tennessee had options when purchasing coverage on the exchange.

Choice and competition among insurers has decreased not only as insurers have left the exchanges, but as the nonprofit consumer operated and oriented plans, or co-ops, have failed.

The health care law approved the creation of 23 co-ops, which were designed to provide consumers with more choice. However, in three years, 17 co-ops have collapsed.

7.) “In some states, the premium increases are manageable, 2 percent or 8 percent, some 20 percent. But we know there’s some states that may see premiums go up by 50 percent or more.”

Insurance commissioners have been mulling over insurers’ proposals for rates in 2017 over the last few months, with approved rates beginning to trickle out.

In at least eight states—Alabama, Georgia, Illinois, Minnesota, Nebraska, Oklahoma, Pennsylvania, and Tennessee—premiums will rise by an average of 30 percent.

Additionally, the cost of premiums for plans sold on the individual market will increase by an average of 25 percent.

Consumers in just one state so far, Vermont, will see premium increases below 10 percent. There, insurance rates will rise by an average of 5.5 percent.