My Bit Part in Presidential Elections and the Rush to Citizenship 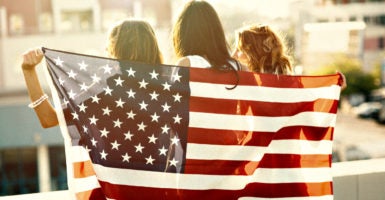 "As honored as I was to become a U.S. citizen in record time in 1996," Helle Dale writes, "naturalization was a process beset by problems that should be a call to caution." (Photo: iStock Photos)

Sens. Charles Grassley, R-Iowa, and Ron Johnson, R-Wis., released an internal email from the Department of Homeland Security suggesting that the Obama administration is granting as many citizenship applications as it can in the run-up to the Nov. 8 presidential election.

According to the email, a Texas immigration office urged volunteers to report for work on weekends.

Immigration groups have tried to push through 1 million new naturalized citizens and have fallen short. Still, the effort has created a considerable backlog that demands extra efforts to clear before the election.

“Your department seems intent on approving as many naturalization cases as quickly as possible at a time when it should instead be putting on the brakes and reviewing past adjudications,” the two Republicans say in a letter to Jeh Johnson, secretary of the Department of Homeland Security.

It will be recalled that 800 people designated for deportation were instead were granted U.S. passports mistakenly, according to an inspector general’s report.

As it happens, I was myself an unwitting beneficiary of President Bill Clinton’s rush to produce more citizens and therefore more voters in 1996. As honored as I was to become a U.S. citizen in record time in 1996, naturalization was a process beset by problems that should be a call to caution.

My previous experience of dealing with the relevant agency, then called the U.S. Immigration and Naturalization Service and part of the Department of Justice, had not been characterized by efficiency or speed. In fact, my green card application was delayed because it was (in precomputer days) lost behind a file cabinet for six months, so I was told.

So imagine my surprise when my citizenship application, filed in June, sped through the system in just three months. By September, I was granted my citizenship interview. I could hardly believe my own good fortune.

My interview took place at an INS office in Rosslyn crowded with a teeming throng of aspiring Americans. But it was a relatively painless affair: After displaying a sufficient understanding of U.S. history and institutions, I was photographed, fingerprinted, and sent off to await my swearing-in ceremony.

A good friend who worked at the State Department soon offered a reason for the unexpectedly swift process. It turned out that everybody in her office at State had had vacation time canceled, been detailed to consular work, and got paid overtime to expedite Clinton’s “Citizenship USA” program. She herself was headed for New York and would be there for weeks.

One problem: The FBI was unable to keep up with the pace and did not perform the required fingerprint checks on nearly 200,000 people. Thousands were approved despite having criminal records, which should have disqualified them for U.S. citizenship.

At the swearing-in ceremony at the D.C. courthouse to which I had been assigned, almost half of the 100 people on the list were missing because they had been pulled at the last minute. Having jumped through all the hoops to become an American citizen, the swearing-in is not an event you miss unless something is seriously wrong.

Today, insufficient vetting of new immigrants represents an even graver danger than it did back in 1996.

The kind of terrorism inspired or organized by ISIS and al-Qaeda ought to make us redouble efforts to protect against allowing the wrong elements to get through the immigration process. Instead, the Obama administration appears to be going in the opposite direction.