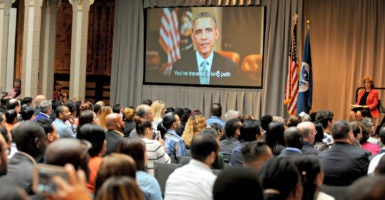 The branch manager for the Houston office of U.S. Citizenship and Immigration Services seemed clear about the reason and timing for asking staff to work overtime to push through more citizenship applications.

“The field office due to the election year needs to process as many of their N-400 cases as possible between now and FY 2016,” the manager said in an email to staff dated July 21, 2016, and referring to applications for citizenship called N-400 forms.

The email message from the Citizenship and Immigration Services supervisor offered overtime, including weekends, as an incentive to process more applications:

If you have cases in this category or other pending, you are encouraged to take advantage of the OT if you can. This will be an opportunity to move your pending naturalization cases. If you have not volunteered for OT, please consider and let me know if you are interested.

In Congress, Republican lawmakers are concerned this is a rerun from 20 years ago. In 1996, congressional Republicans accused the Clinton administration of rushing through the citizenship process to register new voters, many likely to vote Democrat, as part of a program called Citizenship USA.

“USCIS anticipated that there would be a spike in applications this year, as we usually see in an election year,” @InouyeUSCIS says.

The manager’s email to Citizenship and Immigration Services employees was made public by the offices of Senate Judiciary Chairman Charles Grassley, R-Iowa, and Senate Homeland Security and Governmental Affairs Chairman Ron Johnson, R-Wis.

Such an apparent rush to citizenship is a particular concern to the senators because of a report from the Department of Homeland Security’s inspector general that found Citizenship and Immigration Services granted citizenship to almost 900 individuals with deportation orders who used false names.

Politics has nothing to do with increased processing of citizenship applications, according to Obama administration officials.

“USCIS’s goal is to process applications for naturalization within five to seven months, regardless of external events such as elections,” Department of Homeland Security spokesman Shin Inouye told The Daily Signal in an email, referring to Citizenship and Immigration Services. Inouye added:

USCIS uses statistical forecasting models to plan for the potential increased volume of work. USCIS anticipated that there would be a spike in applications this year, as we usually see in an election year, but the increase in N-400 applications has exceeded expectations.

The agency “certainly encourages our naturalized citizens to be active participants in our democracy,” Inouye said. “However, like other citizens, no new U.S. citizen is required to register to vote, or participate in any election.”

More evidence is needed than a single email, but the matter warrants investigation, said Mark Krikorian, executive director of the Center for Immigration Studies, which advocates strong enforcement of immigration law.

“If you look at the whole country, these are not many votes,” Krikorian told The Daily Signal in a phone interview. “But a few thousand can make a lot of difference.” He said:

[George W.] Bush won Florida with 500 votes [in 2000]. Al Franken won his Minnesota Senate seat by just a few hundred votes. If it’s close, a really small number of improper voters can make a big difference. Apart from that, there is the principle that there should be higher standards for citizenship.

The two Senate committee chairmen sent a letter Sept. 21 to Homeland Security Secretary Jeh Johnson to inquire about what appeared to be a rush.  Grassley and Johnson write:

We write to express serious concern about an apparent push by your department to rush the adjudication of naturalization applications before the upcoming presidential election, presumably in an attempt to create as many new citizen voters as possible. …

Your department seems intent on approving as many naturalization cases as quickly as possible at a time when it should instead be putting on the brakes and reviewing past adjudications, especially in light of this week’s Office of Inspector General report that found USCIS granted U.S. citizenship to at least 858 individuals from “special interest” countries (i.e. countries that are of concern to the national security of the United States) or countries with high rates of immigration fraud, who had final deportation orders under another identity.

“We sincerely hope history is not repeating itself,” Grassley and Johnson write, noting the Clinton administration’s actions 20 years ago.

In 1996, congressional investigators found a letter from a Chicago alderman to the White House, saying its Citizenship USA program could “provide the Democrats with a strategic advantage” and that “people stuck in Chicago’s naturalization bottleneck represent thousands of potential voters.”

Helle Dale, an immigrant from Denmark, won her approval for citizenship in 1996, that same year. Dale recalls the time between her application and an interview was “insanely fast” under the Citizenship USA initiative overseen by then-Vice President Al Gore, and says she believes history is repeating itself.

Dale, a former journalist who is now a senior fellow for public diplomacy at The Heritage Foundation, says that politicizing the citizenship process would be highly unethical.

“It may not be illegal, but it is a national security concern,” Dale told The Daily Signal. “I really think, because of an election campaign, to rush through the citizenship process is unconscionable.”

It seems obvious that the Obama administration is trying to register more Democrats, said Ira Mehlman, spokesman for the Federation of Americans for Immigration Reform, which advocates stronger enforcement of immigration laws.

“Naturalization as a U.S. citizen is not supposed to be used as a political tool,” Mehlman told The Daily Signal in a phone interview. “Obviously, the administration wouldn’t be doing this if they didn’t think it could make a positive difference for their party in some states.”