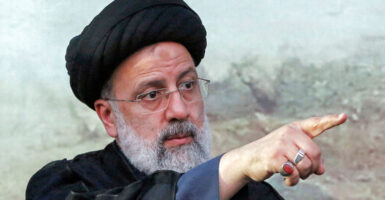 With the withdrawal of three of the seven allowed candidates for Iranian president, Ebrahim Raisi’s chief competitor appeared to be Abdolnaser Hemmati, former head of Iran’s central bank. Pictured: Raisi speaks at a June 6 rally in Eslamshahr, a city about 15 miles south of Tehran, Iran's capital. (Photo: AFP/Getty Images)

Iran is in the final phase of its presidential “selection” Friday to determine who will succeed Hassan Rouhani, who is term-limited from running again. The process is more of a selection than an election because Iran’s theocratic leaders hand-pick the candidates who are allowed to run.

Only seven of the 592 candidates who threw their hats and turbans into the ring were permitted to run. The rest were vetoed by the Guardian Council, a 12-member body that vets candidates, weeding out those who are deemed insufficiently loyal to the hard-line faction that forms the base of support for Iran’s supreme leader, Ayatollah Ali Khamenei.

The president plays a secondary role in Iran’s hybrid theocratic/democratic political system, in which the unelected supreme leader controls decisions on the most important issues. As the leader of Iran’s Islamic revolution, he outranks the leader of the state under Iran’s doctrine of velayat-e faqih(the guardianship of the jurist) a Shiite Islamic concept that justifies clerical rule.

Iran’s president operates along a narrow bandwidth, focusing primarily as a caretaker on domestic and economic issues.

The supreme leader controls Iran’s judiciary, government media, and security forces, including the powerful Islamic Revolutionary Guard Corps.  He calls the shots on all vital defense and foreign policy issues, including the nuclear issue.

Iran’s president is the public face of the regime, but plays a subservient role within the theocratic political system.

This time, the Guardian Council took no chances and aggressively whittled down the field of contenders to guarantee the victory of the supreme leader’s preferred candidate: Ebrahim Raisi.

Raisi, 60, the ultrahard-line chief of Iran’s judiciary, is a protégé of Khamenei who is being groomed as his likely successor as supreme leader.

Hemmati, 65, is a pragmatic hard-liner aligned with Rouhani, the current president. He hopes to attract the votes of Iranians eager for reform, economic revival, and improved relations with the outside world.

Hemmati, an economist, claims to be the best candidate for addressing Iran’s urgent economic problems.  But he has failed to attract much support.

A recent poll indicates that Hemmati is the first choice of only 4.2% of voters, although he probably has expanded his support after other candidates dropped out of the race.

Iran’s presidential election essentially is a choice between hard-liners and ultrahard-liners.  All of the prominent reformist candidates were disqualified.

The lack of a genuine reformist alternative and deep popular disillusionment with the repressive and unpopular regime have spurred calls for a boycott on voting.

Another recent poll projected a 42% turnout among the country’s 59 million eligible voters, which would be a historic low for a regime whose political legitimacy increasingly is questioned by its own people.

For Americans interested in the Iranian elections, it should be noted that the opposition has described Raisi as a “stone-hearted killer” with a “40-year track record of repression.”

Media reports have ascribed to the mid-ranking cleric a key role in the “death commissions” that reportedly carried out mass executions in 1988 of an estimated 5,000 to 30,000 political prisoners.

The executions were denounced as the “greatest crime in the history of the Islamic republic” by Ayatollah Hossein Ali Montazeri, who was considered to be the likely successor of Ayatollah Ruhollah Khomeini, leader of Iran’s 1979 revolution. But Montazeri was sidelined.

In 2019, the United States sanctioned Raisi for what the Treasury Department called “his administrative oversight over the executions of individuals who were juveniles at the time of their crime and the torture and other cruel, inhuman, or degrading treatment or punishment of prisoners in Iran, including amputations.”

‘None Will Be Safe’

Raisi has sought to soften his image by mounting highly publicized campaigns against corruption that target political rivals, but not his own supporters.

Raisi also seemed to call for the assassination of President Donald Trump in early January, on the first anniversary of the death of Iranian Gen. Qassem Soleimani.

“The enemy should not think that if someone [who] appeared in the guise of the American president [and] is responsible for the assassination, they will be safe from justice,” Raisi said a year later. “None will be safe anywhere in the world. The resistance is determined to take revenge.”

The selection of Ebrahim Raisi as Iran’s president will have significant consequences for Iran’s policies on external terrorism and internal repression.