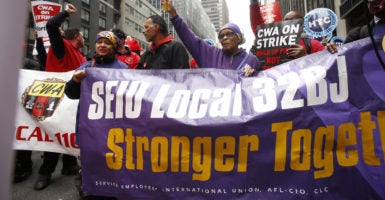 At least three states are expected to pass right-to-work bills next year, which would bring the total number of right-to-work states to nearly 30. (Photo: Andy Katz/ZUMA Press/Newscom)

Not only did the 2016 election bring the country a new president, but Nov. 8 also ushered in the right political environment for a batch of states to pass right-to-work bills.

Twenty-six states have right-to-work laws on the books, and labor experts are expecting lawmakers in at least three more—Kentucky, Missouri, and New Hampshire—to pass bills giving workers the power to choose whether they want to join a union or pay union dues.

“2016 was sort of the tipping-point year for right to work,” Ben Wilterdink, director of the commerce, insurance, and economic development task force at the American Legislative Exchange Council, or ALEC, told The Daily Signal.

“We just got 26 states signed on, and that was the tipping point, and we’ve crossed that threshold,” he continued. “2017 is now going to be the year of right to work.”

In Kentucky, Missouri, and New Hampshire, last month’s election resulted in a flip in party leadership in either governors’ mansions or state legislatures, which put previously defeated right-to-work legislation back on the table.

The issue pits the business community against labor unions, and has proved to be a contentious one for both parties.

Proponents of right-to-work laws argue that they force unions to become more accountable to their members and make states more attractive to companies looking to move.

But unions fiercely oppose right-to-work legislation and say that not only do such laws harm union membership, but they also lead to decreased wages and benefits.

Still, labor experts say they believe that the political landscapes in Kentucky, Missouri, and New Hampshire have created a prime opportunity for right-to-work laws to pass in each of those states.

“The world changed in November of 2016, and advocates of labor reform and for worker freedom are emboldened,” Vincent Vernuccio, director of labor policy at the Mackinac Center in Michigan, told The Daily Signal. “While you’ve seen the fire of worker freedom spreading brightly across the country, it’s now raging thanks to the November election.” According to Dave Adkisson, president of the Kentucky Chamber of Commerce, right to work has been a priority of the business community in the Bluegrass State for at least 30 years.

Republicans in the state Senate have pursued right-to-work legislation in the past, but the bills died in the state House of Representatives, which was controlled by Democrats.

But last month, Kentucky voters gave Republicans control of the state House for the first time in more than 90 years.

Now, with a GOP trifecta in the state Senate, state House, and the governor’s mansion—Gov. Matt Bevin, a Republican, was elected to a four-year term in 2015—Adkisson said business leaders are “almost to the point of [being] giddy.”

“One of the key elements of the labor argument is that right to work doesn’t matter to business, that they choose locations for other reasons,” Adkisson told The Daily Signal. “I can assure you that business leaders consider right to work as a major signal about whether a state is pro-business or not.”

Adkisson said international firms will typically hire consultants to help determine where in the U.S. they should move, and many of those consultants will “start their search only considering right-to-work states.”

For Kentucky, that ultimately meant losing out on economic development opportunities.

“Companies are not going to relocate to a place where they don’t think they can get a workforce, but invariably in that top list of factors is right to work,” Adkisson said. “You want to at least make the long list to be considered.”

Until recently, business leaders, particularly those in Louisville, were more “fatalistic” about right to work not passing Kentucky’s state Legislature.

But when Indiana—Kentucky’s neighbor to the north—passed a right-to-work law in 2012, “that suddenly got the attention of Louisville,” Adkisson said, in part because Indiana appeared “more pro-business.”

“It’s just a general issue of competitiveness,” he said.

Kentucky state legislators will meet for a shortened session, just 30 days, in January, so they have a tight timeline to pass right-to-work legislation.

Bevin said in September he wanted to see the state Legislature tackle right to work next year, but in an interview with the Paducah Sun earlier this month, he said he would allow the Legislature to decide how to address a bevy of issues they’ll face next year.

“Kentucky has demonstrated that the state is ready,” Jonathan Williams, vice president of the Center for State Fiscal Reform at ALEC, told The Daily Signal. “I’d expect it within the first half of the year.”

While the success of right to work in Kentucky hinged on the makeup of the state Legislature, it was the election of Republican gubernatorial candidate Eric Greitens in Missouri that bolstered Republicans’ attempts to pass right-to-work laws in the Show-Me State.

“I support it because it would stop companies and union bosses from taking a cut of your paycheck to support their political organization,” Greitens said of right to work on his campaign website. “It’s just common sense. That money is your money—and you should decide how you want to spend it.”

Republicans have a supermajority in the state House of Representatives and the state Senate, and already, GOP state lawmakers in both chambers have prefiled right-to-work bills for the 2017 legislative session.

Williams, of ALEC, said Kentucky and Missouri are the “low-hanging fruit” for right-to-work proponents.

Though he and other labor experts are hopeful New Hampshire will join their ranks next year, New Hampshire is “somewhat on the bubble,” he said.

Republicans will control the state Legislature and the governor’s mansion in the Granite State after voters elected Republican Chris Sununu governor in November.

“I’ve talked to businesses outside of this state that have clearly brought it up to me, so there’s no doubt by passing right to work, it will open up new economic opportunities for the state of New Hampshire,” he said in an interview with the New Hampshire Union Leader.

Still, the governor-elect encouraged state lawmakers to “be good listeners on both sides of the aisle.”

State lawmakers in the New Hampshire House passed a right-to-work bill last year, but it didn’t make it out of the Senate.

Though Republicans control the state government, Williams said there has been resistance among the GOP’s ranks.

Additionally, Democratic state Sen. Lou D’Allesandro of Manchester told the Union Leader opponents of right to work “have a good chance to stop it.”

Also at issue in New Hampshire is the dearth of other right-to-work states in the New England region.

Kentucky and Missouri are surrounded by states with right-to-work laws on the books, so they compete with others for business opportunities.

For New Hampshire, which would be the first in the region to become right to work, that competition doesn’t exist.

“There’s less pressure on them to get this across the finish line,” Wilterdink said.

Still, Williams said success in New Hampshire would be a “symbolic victory for conservatives.”

“If you saw the first state in New England become a right-to-work state—it’s been a tough region for conservatives to crack,” he said. “It would embolden right-of-center officials to push harder.”

Labor experts are confident that by the end of 2017, the number of right-to-work states will hover around 30.

Though they’re certain Kentucky and Missouri, at a minimum, will pass right-to-work laws, Wilterdink said lawmakers in three more states—Delaware, Pennsylvania, and New Mexico—will at least consider bills to make right to work a reality.

“We’re seeing a lot of movement and a lot of pressure, especially as businesses look at other states, especially as more and more states become right to work,” Wilterdink said. “States and their citizens are realizing they’re missing out.”

Republicans in Pennsylvania introduced right-to-work bills in the past, without success.

Earlier this year, New Mexico Gov. Susana Martinez committed to including right to work on her agenda for the 2016 legislative session.

Right-to-work bills have also been introduced in the Delaware General Assembly, but they were ultimately blocked by Democrats who control both chambers.

“This is a jobs bill in the states,” Williams said. “As more and more legislators are elected and looking for ways to make their states more competitive in growing jobs, we’ve continued to see businesses move from one state to another with better climates. This is one of the best things states can do.”