I’m an African-American Woman. Here’s My Advice to Conservatives Wooing My Community. 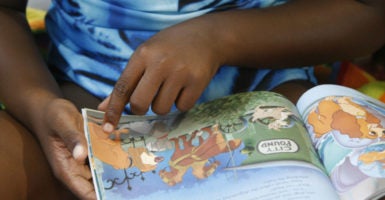 Our children grow up sicker, poorer, less well-educated, and at greater risk than other American children. (Photo: Karen Focht/Zuma Press/Newscom)

The moment Donald Trump urged black voters to consider supporting him—asking, “What do you have to lose?”—the consultants and pundits sprang into coordinated action, bombarding the airwaves with their “r” and “b” words.

There’s a method to this madness, of course. Call someone a racist and they’ll no longer be heard. They’ve been accused of racism, after all, so they’re not just contemptible, they’re outside the realm of public discourse.

That’s why the noise makers are so busily at work.

While all of this strikes many voters as manipulative and even childish, what really troubles me is what it masks: the pain my community is suffering right now.

Everywhere I look, I see problems that cry out to be solved. African-American poverty should be going down—instead, it’s rising. Our children should be thriving—instead, millions of them live in broken homes. Our streets should be peaceful—instead, violence continues to take a devastating toll. Our schools should be nurturing excellence—instead, far too many of them are factories of failure.

Our community is reeling under the impact of unceasing assault.

And our future should be brighter—instead, we have less and less reason for hope.

In short, our community is reeling under the impact of unceasing assault.

Despite all this, we remain a proud people. We’ve suffered horribly over the centuries, and yet we survive. Our traditions have largely endured. For the most part, our churches remain intact. And our babies are born with all the intelligence, creativity, energy, and possibility that God grants to every child.

But that’s where our path veers off course. Our children grow up sicker, poorer, less well-educated, and at greater risk than other American children. Our families, once boasting more marriages and two-parent households than whites, are now battered by single parenthood, unemployment, and poverty. And our community, once the self-sustaining citadel that enabled us to survive slavery and institutional racism, is now teetering on the brink of destruction.

I recently conducted a detailed analysis of how we are faring, and what I found shocked me. On issue after issue, the numbers are heart-wrenching.

Take education, for example. In 1961, I was one of the first black students in my hometown of Richmond, Virginia, to integrate a whites-only public school. Decades after institutional segregation was outlawed, however, separate and unequal schools remain.

According to the National Assessment of Educational Progress, schools serving majority-minority communities have the worst performance, the largest achievement gaps, the highest crime rates, and the least experienced teachers. Shockingly, the average high school graduation rate among black students in many of America’s largest cities is less than 50 percent. Less than 50 percent! And in cities like Detroit, more than nine in 10 black students can’t even read or do math at grade level.

It wasn’t always this way. Having been denied schooling during their enslavement, emancipated blacks embraced education as the ticket to freedom and equality. Then came historically black colleges and universities (including my alma mater, Hampton University), and African-Americans began to advance at every level of scholarship.

All that began to change under the weight of President Lyndon B. Johnson’s “Great Society” programs, as high-performing neighborhood schools gave way to bureaucracy-choked failure factories. Today, grim statistics and generations of wasted talent are the legacy of an agenda that has failed our children and community.

That’s why I say what’s really important here isn’t the political noise, but the personal tragedies it is masking.

Scores of well-paid consultants and media personalities are on the air, seemingly debating race. But their focus isn’t really on community renewal—it’s on full-combat politics. As a result, they gleefully throw around words like “racist” and “bigot” without pausing to truly, honestly consider the plight of the minority community they purport to defend. And when they’re done, they’ll put another notch in their professional belt and move on to the next campaign or news show while African-Americans continue to suffer.

That’s just not acceptable, not at all.

And it’s not OK that so many consultants and pundits would rather play politics than help save my people.

Fortunately, many others genuinely care about economic advancement and social justice for all Americans. They recognize we need to start over. Some now call the Republican Party home because they recognize conservative policies offer the commonsense solutions my community needs. Others try to encourage the Democratic Party to adopt more effective conservative policy solutions.

Having said that, I need to make clear that this is not a battle that can be won by a political party on its own—it depends on building strong support within the African-American community, where many of us are already working to achieve community renewal.

Winning this battle, then, will depend on political parties and conservatives getting it together and getting it right.

As for conservatives, this will take focused effort, real trust, unwavering consistency, and sensitivity to symbols, as well as the powerful acts of just showing up and listening. Personnel decisions within campaigns, transitions, and governing will make a big difference too, since having experienced, politically savvy African-Americans with stature inside those three dynamics is vital to avoiding unforced errors.

Winning this battle, then, will depend on political parties and conservatives getting it together and getting it right. As difficult as the task may seem, I know in my heart it can succeed. And I know that that success will enable my community to start over and achieve the progress it so richly deserves.

With leadership, a plan, and execution, we can get this done. Otherwise, we’ll never be able to solve the problems that exist beyond the noise.